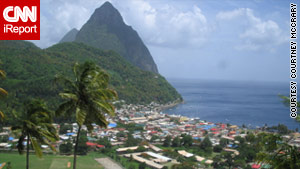 The government of St. Lucia apologized for an attack on three gay men visiting the island.
STORY HIGHLIGHTS
RELATED TOPICS

(CNN) -- The government of St. Lucia is apologizing to three American tourists for an attack the men say was motivated by anti-gay sentiment.

"The nation is indeed saddened by the experience of the visitors while in Saint Lucia," said Minister for Tourism Allen Chastanet in a statement.

"While horrible crimes such as these can happen anywhere across the globe, we are deeply disappointed that it should have happened here."

The government of the Caribbean island extended "sincere apologies" to Todd Wiggins, Michael Baker and Nick Smith of Atlanta.

The tourists were at their villa in Soufriere, St. Lucia, on March 3 when five masked and armed men burst in and robbed them of 5,000 East Caribbean dollars (about $1,870) and personal items, according to the Royal Saint Lucia Police Force.

One of the visitors suffered minor injuries during the attack, police said in a statement. He was treated at the Soufriere Hospital and discharged.

One man is in custody in connection with the incident, police said.

The attack appeared to be "perpetrated by individuals whose views do not reflect sentiments of the majority of law-abiding citizens," Chastanet said, adding that St. Lucia does not condone such acts of violence.

Baker said he feels "very strongly" that anti-gay hate prompted the attack, according to the Georgia Voice, a newspaper aimed at the state's gay community.

The attackers used an anti-gay slur and threatened to kill the men, said Baker, according to the report.

Homosexual relations are against the law in St. Lucia and there is "widespread social discrimination against lesbians, gays, bisexual, and transgender (LGBT) persons in the deeply conservative society," according to the U.S. Department of State 2009 Human Rights Report.