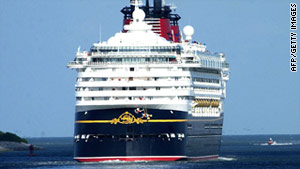 An unidentified worker on board the Disney Wonder failed to appear for a Tuesday shift.
STORY HIGHLIGHTS
RELATED TOPICS

(CNN) -- A Disney Cruise Line employee has been reported missing during a seven-day cruise off the Mexico's Pacific coast, the company said Thursday.

The unidentified worker on board the Disney Wonder failed to appear for a Tuesday shift, Disney spokeswoman Christi Erwin Donnan said.

The U.S. Coast Guard, the Mexican navy and the Bahamas Maritime Authority have participated in the search and investigation, Donnan said. The Disney Wonder is registered in the Bahamas.

The Mexican navy has been conducting searches since Tuesday, Disney Cruise Line said in a written statement.

"Given the circumstances, we are very concerned about this situation and are doing everything possible to assist with the search effort and investigation," it said.

The company said it conducted a thorough inspection of the cruise ship.

The Coast Guard provided long-range search aircraft but is not now actively involved in the search.

The FBI is not involved because it does not have jurisdiction, as the ship was off the coast of Mexico flying under a foreign flag, said spokeswoman Laura Eimiller of the agency's Los Angeles office.

But the FBI has heard no reports of criminal activity or foul play, she said.

CNN's Dave Alsup and Sara Weisfeldt contributed to this report.