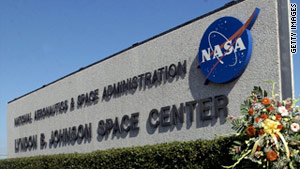 (CNN) -- Two Texas lawmakers, upset that Houston was not picked as one of the retirement homes for NASA's space shuttles, introduced legislation Friday that would bring the Discovery shuttle to the city for 15 years.

The space shuttle Atlantis will be displayed at the Kennedy Space Center Visitor Complex in Florida; the Endeavour, at the California Science Center in Los Angeles; the Discovery, at the Smithsonian's National Air and Space Museum Steven F. Udvar-Hazy Center in Virginia; and the test shuttle Enterprise at the Intrepid Sea, Air & Space Museum in New York.

"The Smithsonian is America's museum. Over the years of their history, they have readily loaned major U.S. artifacts to the American people. What better community to host an orbiter than Houston, Texas," Rep. Sheila Jackson Lee, D-Texas, said in a statement. "America is a great country. It is a fair country, and this is a solution that is both great and fair."

Houston is home to the Lyndon B. Johnson Space Center, which is where NASA's Mission Control Center is located.

"The goal of this bill is to reverse an unjust decision which would have an adverse economic impact on the city of Houston. The Johnson Space Center and its committed workforce have been a key component of the space shuttle program since it started in the 1980s," said Rep. Al Green, D-Texas, who introduced the legislation along with Jackson Lee.

Earlier this week, 17 members of the U.S. House of Representatives Texas delegation sent a letter to NASA Administrator Charles Bolden to express their disappointment and to say they were prepared to use their power in Congress to "stop this wasteful decision."

"It defies logic for a shuttle to go to New York City, a place with no connection to NASA. It's like putting the Statue of Liberty in Omaha," Rep. Ted Poe, R-Texas, said in a statement.

Housing a space shuttle is not just an honor -- it means money, according to the executive director of New York's Intrepid Museum. Susan Marenoff estimates that once the shuttle is in place, her museum will see an additional 300,000 people and $106 million in economic benefit.

That is a benefit Texans believe is rightfully theirs. Rep. Pete Olson, also a Texas Republican, bluntly reiterated that in a statement, saying, "No city in the world deserves a shuttle more than Houston, certainly not New York."