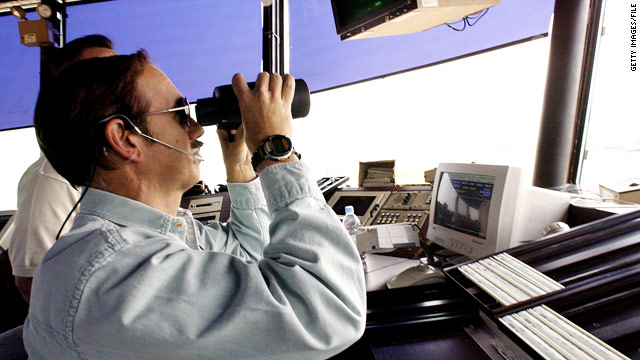 Washington (CNN) -- The Federal Aviation Administration has fired two air traffic controllers, one of whom worked in Knoxville, Tennessee, and the other in Miami, Transportation Secretary Ray LaHood said Wednesday.

Both were fired for sleeping incidents, according to the Transportation Department.

The firings followed a spate of incidents in which controllers in various cities were reported to be sleeping while on duty.

The controllers fired Wednesday were not identified, but one such sleeping incident at the Miami Air Route Traffic Control Center was among the most recently reported, with the FAA suspending a unidentified controller there last Saturday.

Air traffic controllers 'in a bind'

In February, a controller was found sleeping while on duty in the radar room at the McGhee Tyson Airport in Knoxville. The FAA said earlier this month it was taking steps to fire that controller.

Aside from Miami and Knoxville, cases of sleeping controllers have been reported in Washington; Seattle, and Reno, Nevada. There have been two suspected cases in Lubbock, Texas.

All the incidents occurred during controllers' midnight shifts. Most -- though not all -- of the lapses occurred at local control towers.

In at least one incident, the FAA has said the controller deliberately went to sleep, while some of the others appear to have been accidental.

And federal officials announced a series of new regulations Saturday aimed at preventing air traffic controllers from falling asleep while on duty.

Among other things, controllers now must have a minimum of nine hours off between shifts, instead of the current minimum of eight hours, LaHood said. In addition, controllers can no longer be put on an unscheduled midnight shift following a day off.

FAA managers also will schedule their own shifts so as to ensure greater coverage in the early morning and late night hours, the secretary added.

CNN's Jeanne Meserve and Mike Ahlers contributed to this report.