Why your trusty GPS sometimes fails you

By Jeffrey Weiss, Special to CNN 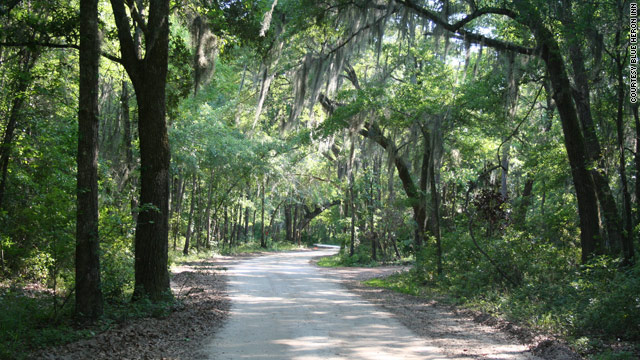 Guests at the Blue Heron Inn, located at the end of this road along the Georgia coast, often get lost using GPS devices.
STORY HIGHLIGHTS

(CNN) -- There's a droll car insurance commercial making the rounds lately. An actor plays a GPS navigator device that hasn't been updated for a while and is "just winging it." He directs his driver to turn the wrong way down a one-way street. "Recalculating!"

The joke contains a kernel of truth. GPS navigation systems aren't perfect. Most of them are pretty good, but blind acceptance of their advice can become a traveler's nightmare.

The Blue Heron Inn is a quiet bed-and-breakfast on the Georgia coast, a peaceful destination for birdwatchers and folks seeking to slough off the stresses of modern living. But the owners have learned that some of their guests will arrive late, frustrated and angry.

These are the tech-savvy travelers who just know that their GPS navigator will give better instructions than the ones that Blue Heron owners Bill and Jan Chamberlain carefully send to everyone with a reservation.

"Some users -- usually the tech person of the couple -- will sometimes try to defend their GPS. And their partner usually says, 'throw it out the window' and 'we would be better off without it,'" Jan Chamberlain said. "Luckily we have wine ready to soothe them, and once they have rested they are in better spirits."

The problem is that several of the most popular navigation systems, and particularly those on smartphones, send people to a location that's wrong by several swampy miles. Google Maps recently offered two locations for the Blue Heron Inn address. One wasn't even the right street name.

Old-timers in Miami may remember a road called Tamiami Trail. Younger drivers may know it as Calle Ocho. Number-crunchers may just call it SW Eighth Street. But OnStar's directions refer to it as U.S. 41.

All of those names are correct. But if you're depending on audio navigation, you could miss a turn out of confusion.

No matter what kind of GPS system you use, there are potential problems common across platforms:

• Despite the many brands of devices and apps available, fewer than a handful of companies actually produce the map databases. So if there's an error on one device or app, there's a good chance others will have the same error.

• "Maps are always out of date," is the succinct evaluation of Rich Owings, curator of the website GPSTracklog.com. Additions and corrections can take months to be added to the commercial databases, and each company that produces an app or device has its own timetable for offering updates.

• Be careful about your settings, Owings warns. Make sure you have your navigator set for "paved roads" and "fastest route" rather than the shortest. "If you set it for the latter and allow it to route you onto unpaved roads, you're courting disaster, especially in isolated parts of the western U.S. or in mountainous regions," he said. "And it may well direct you into an area without cellular coverage. People have died due to mistakes such as these."

• For international travel, be extra wary. The databases are getting very good, even for formerly remote parts of the globe. iGO Navigation, for example, offers maps and other content extras for more than 80 countries from all continents. But the iGO maps are only updated quarterly. Imagine if you have last quarter's map for Japan or Libya. Make sure you are aware of local conditions.

• Most GPS devices are looking for signals from several satellites. If you're unlucky enough for your local patch of sky not to have enough satellites, or you're in a downtown where the signals are blocked, you're not going to get accurate navigation. Some premium systems charge extra because they have so many satellites aloft. Iridium, for instance, has 66 satellites in orbit.

There are also some differences between systems.

• Does your device or app use an "onboard" or "offboard" map? An onboard system carries the map in your device. That's true for standalone GPS devices such as TomTom or Garmin and smartphone navigators like Navigon. The advantage is that they work whether or not you have cell phone connection. But if their map hasn't been updated recently, you could have a problem ("Recalculating!")

• Some systems have incorporated proprietary correction systems in an attempt to boost accuracy. Mapquest, for instance, uses crowdsourcing with 320,000 registered mappers who are sending in thousands of tweaks every week. NAVTEQ, one of the major map database companies, has more than 1,100 of what it calls "geographic analysts" around the world, actually driving the roads to verify or correct the database.

But even with all of that, there will be holes. Jerry Jacobson is managing director of Monmouth Plantation, a resort in Natchez, Mississippi. He's been wrangling with the databases to correct mapping errors since he got there six months ago. He's so frustrated that he finally added the precise, accurate latitude and longitude to the resort website in hopes that will help guide guests. But this isn't his first battle with GPS.

His prior hotel was in the mountains of New Hampshire at the end of a country road that somehow didn't show up on the databases.

"I was frightened guests would drive off into "neverland" and freeze to death during the winter," he said. "It turns out the local community never bothered to register their town maps with state agencies; thus, the end result being my then hotel was over a mile from where the mapping companies had placed it."

The bottom line: GPS is an amazing aid for the many directionally challenged travelers who nevertheless take to the roads. But it has its limits.

"It's always good to take the directions with a grain of salt," said Owings of GPSTracklog. "Do the Reaganesque thing -- trust but verify."