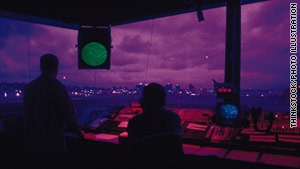 A short nap can boost performance, according to research.
STORY HIGHLIGHTS

Washington (CNN) -- The National Transportation Safety Board hopes air traffic controllers may soon benefit from long-standing research into worker fatigue by implementing strategies that include intentional sleeping on the job, the use of caffeine and other methods shown by science to deal with the overnight shift.

"A controlled nap can boost performance significantly," said NTSB board member Mark Rosekind at a briefing with reporters Monday at agency headquarters. Citing a 1995 study from NASA that has been backed by other research, he said, "A 26-minute nap improved performance 34% and alertness 54%."

The study prompted an advisory that has been adopted by some international air carriers to keep pilots more alert in the cockpit. The measures were not moved forward by the Federal Aviation Administration.

Congressional lawmakers may soon consider legislation reauthorizing the FAA that includes provisions addressing the problem of fatigue. The NTSB's recommendations Monday followed a listening tour of air traffic controllers around the country. The board's advice is issued to federal and other agencies.

Inside an air traffic controller's life

Referring to a variety of transportation workers who unintentionally fall asleep on the job, the NTSB official said, "We have many circumstances of documented, uncontrolled spontaneous sleep episodes," including incidents among air traffic control, long-haul trucking and railroads.

According to the research, "A short nap can boost performance, a long nap can make you groggy," Rosekind explained, saying the tactic of catching a few winks is but one element in a comprehensive plan.

"If you don't have a fatigue management plan, and you just throw more people at it, then you've got more tired people on," he said. "However many people you throw at the problem, you're still gonna have the fatigue risk."

In a written statement, NACTA President Paul Rinaldi said, "There is nothing groundbreaking about these recommendations. They are common-sense solutions to a problem NATCA and fatigue experts have consistently raised for years while past administrations turned a blind eye."

Rosekind says the NTSB identified the problem of fatigue among air traffic controllers 30 years ago, but only within the past 15 years or so has the research revealed what fights the problem. He used the example of sleepy drivers who turn up the radio and roll down a window to try to stay awake on the road.

"They only work for 10 minutes or so," he said, saying the research suggests greater benefits from pulling over for a short nap.

And addressing the economic issues of improved staffing and the cost of scheduling people more in line with their sleep clocks, Rosekind said, "Most people focus on the cost of the fatigue risk when an accident happens.

"What people don't quantify is what they're losing in productivity and performance before that," he added.

Former air traffic controllers say sleeping on the job is nothing new. Their schedules may shock you.
Controllers going back in the skies

A program that puts air traffic controllers in the cockpit to become familiar with pilots' workloads and responsibilities is being resurrected.
Sleep a 'privilege' for night workers

Night shift workers say they struggle to stay awake no matter how many years they've done it.