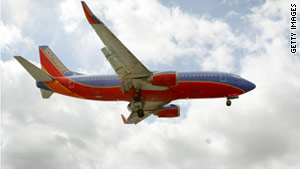 A Southwest Airlines B-737 ruptured during a flight on April 1. The plane made an emergency landing in Yuma, Arizona.
STORY HIGHLIGHTS

Washington (CNN) -- Investigators have zeroed in on several clues as to why the fuselage of a Southwest Airlines B-737 ruptured on April 1.

In a report released Monday, the National Transportation Safety Board avoided answering the big question: Is it a systemic problem that could affect scores of other Boeing 737s, or was it a one-off manufacturing issue that just impacted the 15-year-old incident aircraft.

The incident scared passengers on Southwest Flight 812 when a large hole appeared, causing the rapid depressurization of the plane, as it flew at 34,000 feet. The flight crew conducted an emergency descent, landing at Yuma International Airport in Arizona. No one was seriously hurt.

From the beginning, investigators focused on the likelihood that metal fatigue played a role. The frequent cycle of pressurization and depressurization, along with the heating and cooling of an aircraft's skin, contributes to fatigue, investigators and the plane's manufacturer said. But the manufacturer said problems were not expected so early in the plane's life span.

The skin tear occurred at a "lap joint," where two sections of skin overlap and are joined together with three rows of closely spaced rivets.

In its Monday statement, the NTSB said the plane's aluminum skin was of the specified thickness and material, but it pointed to several factors deemed significant:

-- The exterior surface was painted blue, but evidence of blue paint also was found between the upper and lower layers of skin, suggesting it had room to seep between the layers. The report does not say when the plane was painted or repainted, information that could indicate when a problem first appeared.

-- Microscope examination of the ruptured skin revealed fatigue cracks emanating from at least 42 of the 58 rivet holes connected by the fracture. There were also cracks discovered at nine rivet holes forward of the rupture.

-- An inspection revealed gaps between the shanks of several rivets and the corresponding rivet holes for many rivets. Upon removing selected rivets, the holes in the upper and lower skin were found to be slightly offset relative to each other and many of the holes on the lower skin were not round. The NTSB did not say whether that was from wear and tear or manufacturing.