How to NOT get robbed when traveling 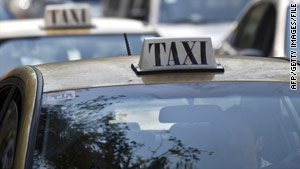 Be careful of unmarked cabs or cabs that appear to be "lying in wait."
STORY HIGHLIGHTS

(Matador) -- 10 tried and tested tips on not falling prey in places where other travelers have.

Large, flesh-eating predators on planet Earth have always had a natural instinct to sniff out sick, injured and weak prey. Nocturnal human predators are no different -- and there's no weaker animal on the Serengeti of nightlife than a wasted foreigner.

This one's obvious, but is also probably the most common slip.

This one goes out to Brazil, where literally every horror story I've heard from friends (including one who survived a double gunshot wound in the stomach and the murder of his companion) starts with a display of wealth.

Don't get me wrong -- you can be doing nothing flashy and still get caught in the wrong place at the wrong time, in Brazil or anywhere. But you dramatically increase your chances of getting robbed if you look like you might have a lot in your pockets or backpack ... or if you're driving a nice car.

This rule applies in countries with serious income disparities (like Brazil or Kenya), and especially in urban areas.

Very few children -- regardless of where in the world you are -- will approach you with malicious intent, but poor kids in big cities are different. They may have been hardened early by the street life or acquired very bad role models (usually their accomplice). And in cities like Rio and Nairobi, they're the most dangerous people on the street simply (and sadly) because they have very little to lose.

In Brazil, if a group of adolescent kids (for age, think "Ciudad de Dios") approaches me at night, I feel it's a scheme to pick my pocket, best case. Worst case, they're either about to rob me with a gun or set me up for someone older to rob me with a gun. I cover my pockets, ignore them completely, and walk quickly to a well-lit and highly populated area as fast as I can.

If you stop in the shadows to try to figure out what they're asking, you're about to get got.

4. Watch the people watching you.

Ever seen a Discovery Channel lion spot an unsuspecting herd of gazelle through the tall grass? They get very low to the ground, put their ears back and stare with intent.

Drug addicts are no different, and the majority of people who make bold robbery attempts -- whether violent or not -- are some sort of drug addict. The good news is addicts aren't even close to as smooth as lions.

If you're watching the people who are watching you, they'll eventually break that stare at your video camera and make eye contact with you. It can be a pretty intense moment, but in the end, they'll realize you're not the low-hanging fruit they were hoping for.

Which brings me to the next rule ...

10 reasons why Colombia is not as dangerous as you think

5. Don't be the low-hanging fruit; be the lion.

People who rob people are desperate. They're willing to take risks, but they also calculate those risks because they know the stakes are high.

Suppose you're walking around Madrid, carrying a DSLR camera that's attracting a lot of attention. The minute the schemer shifts his gaze from your camera to your eyes, there's an instant evaluation. Either you're low-hanging fruit, or you're not. If you've ignored rule #1, you're already getting followed and it's just a matter of time before they make their move.

If, on the other hand, you appear sober, aware and confident, they're probably going to pass and wait for something easier. Say you're observing rule #3 and notice you've caught the attention of three kids on the sidewalk ahead of you. Look them right in the eye, make fists, puff out your chest and confidently walk on by. If you know how to say "how it's going" in their language, even better.

You never want anyone to look at you like the low-hanging fruit; you want them to look and think, "there's a decent chance this one would be the wrong one to screw with. I'll just wait for the sicker, weaker, more injured tourist."

I lived in the San Telmo area of Buenos Aires, Argentina, for 8 months in 2005. It was extremely safe and I never had a problem.

The barrio next door was La Boca, home to La Bombonera -- a massive stadium where the beloved Boca Juniors fútbol club plays. To get the full effect of the Boca games, I'd sit in the "public section," notorious for fights and in-stadium stabbings, beatings and robberies. I made sure never to bring a camera, wallet, watch, or anything else that made it seem like I had something of value on me.

I also dressed in Boca colors. Sure, I had authentic love for Boca, but whatever my fan affiliation, you couldn't have paid me to walk into that section wearing anything but home team gear.

No, I'm not saying to keep your iPod in your underwear. This is about the stuff you're not taking out of the hotel when you go out at night.

Most people who rob hotel rooms are freaked out -- scared as hell they might get caught -- and as a result, they're usually in a huge hurry. Some are probably high.

They run in with flashlights and take all the big bags and stuff near the outlets. Don't make it easy for them to find your most expensive, irreplaceable items. Store your laptop under a chair or bed when you go out at night. It's not an FBI search ... many rocks will be left unturned.

If you leave all your electronics on the desk, you'll be left with nothing. If you stash them in random places, you'll be short a few beach towels. Worth doing for peace of mind alone.

8. Listen to the locals.

I've never crossed over to "the wrong side of the tracks" and suddenly gotten robbed. But I have been walking between neighborhoods and been told sternly that it's crazy to let my little sister keep her DSLR out to take pictures.

Locals can be overprotective (with kind intentions), but whenever someone sticks their neck out to explain that the street you just turned onto ain't the best for tourists, rules #1-5 should be observed with increased diligence. And it's usually a good idea to heed the advice.

The safest thing to do is call and order every cab you take, but when you're out at a bar in a country where you don't speak the language, finding someone to call you a cab isn't always realistic.

The second best option is flagging down a cab that's driving by. If you get in a cab that's just been sitting there "lying in wait," you're increasing the chances of getting yourself into trouble.

The guys who offer you cabs inside the airport are always super shady, and it's never smart to go with them. Always best to go straight to the professional and hopefully regulated "cab line" at any foreign (or domestic) airport.

Getting in unmarked cabs and cabs that have another dude in the passenger seat is also always a bad idea.

10. Recognize when a bad situation is developing and get out of there.

Not all crime is skillfully premeditated and executed -- oftentimes it's improvised.

Some local punks take note of the fact you're alone or vulnerable and you have something they want. If you're observing rule #4 and you see people talking about you and looking over at you, there's no reason to hang out and see if it's just your imagination.

Always err on the side of caution and get out of there fast as you can, preferably to a well-lit place with lots of people. Nine times out of 10 they'll realize the opportunity has passed and carry on with whatever they were doing before they noticed you.

What rules do you observe when traveling in 'dangerous' countries? Are they any different than what you do at home? Tell us in the comments.