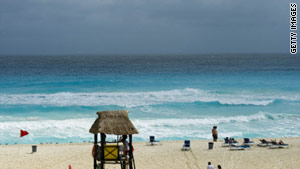 (CNN) -- A recent wave of violence caused by turf wars between rival drug cartels and security forces in Mexico has kept many American and international tourists away from the United States' neighbor to the south.

Recently, the U.S. State Department broaded its travel warning for Mexico, singling out 11 states and warning Americans not to drive at nighttime.

In an interview with CNN, he said he is confident that more tourists will visit Mexico this year.

CNN: How much was tourism affected by the violence last year?

Rodolfo Lopez Negrete: 2010 was a very good year for Mexico. We considered it to be a rebound year. (More than) 22 million tourists visited Mexico last year.

CNN: I was recently in Acapulco and I noticed that a lot of the hotels that normally this time of the year receive spring breakers, mainly from the United States, are completely empty. So, some of the things that you're telling me do not correspond to the reality I saw there.

Lopez: We're working on a transformation program for Acapulco to rehabilitate Costera Miguel Aleman [the avenue that runs along the bay] which is one of the landmarks of Acapulco. We're working on additional air connectivity out of the U.S. market and international points of origin.

CNN: But Mr. Lopez, the main problem in Acapulco is not necessarily infrastructure, but the violence. What are the Mexican government and the Tourism Board doing to solve this problem?

Lopez: Mexico is a very large country. When you take into account the distance between Ciudad Juarez [the most violent city in Mexico] and Cancun, you're talking about 1,400 miles of distance. Puerto Vallarta is 1,000 miles away and Los Cabos about 1,600 miles away. That is equivalent to the distance between New York and Houston or New York and Dallas.

CNN: But the fact still remains that violence is a serious problem in Mexico. Wouldn't you agree?

Lopez: Yes we agree, and we understand the fact that these episodes have created a certain level of perception that is undesirable, but these have occurred in very specific pockets of the country.

CNN: Your office says that 22.4 million travelers visited Mexico last year. What is the expectation for this year?

Lopez: We have a plan that we have put together until the year 2018. Mexico would like to become one of the most popular destinations in the world. And although we already rank among the top 10 in the world, we would like to escalate that number. For 2011 our goal is to increase our business from 22.4 to 26 million tourists.

Lopez: Seventy-five percent of the total number of last year's 22.4 million visitors originated in North America. The U.S. remains the number one market, followed by Canada.

CNN: What about those traveling specifically by air?

Lopez: Out of the 10 million tourists that we get by air into the different Mexican destinations, the United States generates 6.5 million of those 10 million.

CNN: What do you say to people abroad who watch news about the violence and have concerns about traveling to Mexico?

We would like to tell the untold story. Although we have experienced violence ... the major tourism destinations are perfectly safe.
--Rodolfo Lopez Negrete, Mexico Tourism Board official
RELATED TOPICS

Lopez: We would like to tell the untold story. Although we have experienced violence, it has been concentrated in very specific parts of the country. The major tourism destinations are perfectly safe, whether you talk about sun-and-beach resorts or inland destinations.

CNN: What about risks for those traveling into Mexico by land?

Lopez: We have 50 million border crossings per year. When you take that into account, the ratio or the number of people that have suffered from violence is really minimal.

CNN: Has affordability been affected by the recent wave of violence?

Lopez: Mexico is a very diversified country. We believe that the combination of the fantastic sun-and-beach resorts coupled with the wonderful cultural wealth that we offer make it a very attractive destination for summer travel.

From a value perspective, the quality of the tourism options in Mexico over the last 10 years has improved dramatically.

If you compare that with the price that we're charging right now, it makes it a very attractive proposition for travel.