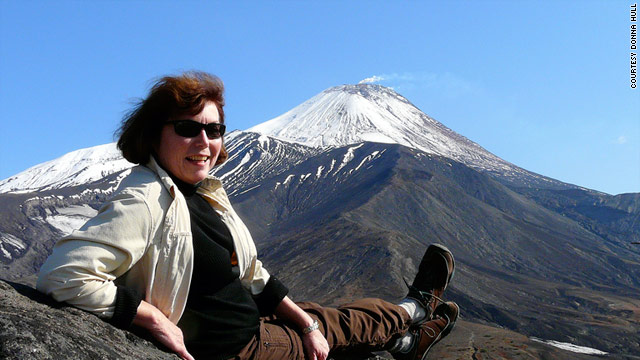 Editor's Note: In 2011, the Baby Boomer generation turns 65. So what can the #Boomers expect in their retirement years? This week, CNN is bringing you special coverage of this generation.

(CNN) -- Sipping cappuccino and taking it slow is one way to experience Italy. Test driving a growling, candy-apple-red Ferrari in the country's Motor Valley is quite another.

So Donna Hull's husband and a friend -- both car enthusiasts -- were ecstatic when they got the chance to zoom around the town of Maranello in the classic sports car on a recent vacation.

"That really beats visiting churches and museums for those guys," Hull said, recalling the trip that had the Hulls and another couple exploring off-the-beaten-path Italy with the help of a hired guide for nine days.

"It was wonderful, it really was."

It might also beat some notions of what travel looks like these days for men and women of a certain age.

Everyone on this road trip was a baby boomer -- part of a generation that was born in the heady years after World War II, went on to become a driving force in cultural and social change in the turbulent 1960s and '70s, and isn't about to slow down now, especially when it comes to travel.

"Baby boomers don't want to sit on a bus and look out the window," said Hull, 60, who created My Itchy Travel Feet, a blog for baby boomers planning their next travel adventure.

Talk about a huge target audience.

The nation's 79 million baby boomers -- Americans born between 1946 and 1964 -- account for more than a quarter of the total U.S. population, according to the Pew Research Center.

Chart: American generations through the years

This year, the oldest are turning 65 and almost two-thirds of them -- 61% -- say they plan to increase their travel, according to a survey commissioned by the AARP late last year.

About 84% feel that the next five years will be fulfilling and 70% believe they will be exciting.

And adventure is exactly what they seem to be looking for.

Baby boomers are intrigued by popular TV shows like "The Amazing Race" and "Survivor," have large budgets and crave trips that offer authentic cultural experiences, according to a study released last year by the George Washington University School of Business and the Adventure Travel Trade Association.

This is a generation that really for the first time regards travel as a right and not a privilege.
--Carolyn Spencer Brown, CruiseCritic.com

Baby boomers also like multigenerational travel -- or exploring the world with their grandchildren and adult children in tow. It's a trend that's especially visible on cruise ships.

"Family cruising is off the charts," said Carolyn Spencer Brown, editor in chief of CruiseCritic.com. "Boomers are definitely making their imprint on the cruise industry. ... This is a generation that really for the first time regards travel as a right and not a privilege."

On a scale of 1 to 10, baby boomers are an "11" when it comes to their importance to the cruising industry, Brown said, prompting ships to add everything from better food to more sophisticated entertainment to please them.

Another trend? Baby boomers want to cross items off their "bucket list" -- the inventory of experiences they've dreamed of doing all their life, be it taking in the beauty of Machu Picchu, bungee jumping in New Zealand or going on an expedition cruise to the Galapagos Islands.

"We all have those things we want to do and then of course as you get older, time is running out," said Don Mankin, an adventure travel expert and author of "Riding the Hulahula to the Arctic Ocean: A Guide to Fifty Extraordinary Adventures for the Seasoned Traveler."

"So you begin to think about, 'Well I don't have unlimited time so what are those things that I always really wanted to do, where are those places that I always wanted to go?' ... I think that drives a lot of the travel decisions these days."

Time and money to travel

And don't expect baby boomers to embrace the sedentary, group travel style of their parents' generation. Big tour buses that drop off and pick up travelers on tightly choreographed trips to predictable destinations are a no-no.

Instead, baby boomers are exploring on their own or seeking smaller, less-regimented tours in places they haven't been to yet with lots of free time built in. When going to Italy, for example, they've likely already seen Rome, Venice and Florence, so they might want to explore Tuscany or Sardinia instead.

For the travel industry, that means adjusting to the needs of this large and aging chunk of the population.

"It's like they've all of a sudden discovered us, as if we weren't here yesterday," Hull said. "They're trying to find ways to appeal to us... because baby boomers have the time and they have the money."

One company that's actively courting this demographic is the Preferred Hotel Group, which last fall commissioned a study about the lifestyle and leisure travel habits of baby boomers.

It found almost 80% of them want to visit a place they haven't been to before, close to a third have traveled with their grandchildren and almost a third have taken an international leisure trip in the past 12 months.

'Ignore the boomers at your peril'

This year, the Preferred Hotel Group is launching a series of ads and promotional programs targeted at baby boomers.

The travel industry would be remiss if they didn't pay attention to this group.
--Lindsey Ueberroth, Preferred Hotel Group

"Ignore the boomers at your peril. The travel industry would be remiss if they didn't pay attention to this group," said Lindsey Ueberroth, president of the Preferred Hotel Group.

For Hull, that passion has already inspired her and her husband to see the Italian quarries where Michelangelo got his marble; take a safari in South Africa followed by a cruise from Cape Town to Rio de Janeiro; and squeeze in a Joe Cocker concert during a road trip in Oregon.

The Ferrari is optional.