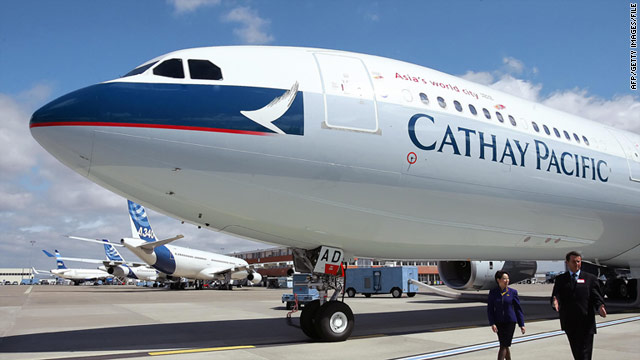 (CNN) -- Panicking passengers turned to prayer as a Cathay Pacific flight with one engine ablaze made an emergency landing in Singapore on Monday, witnesses said.

"We heard a series of loud bangs, then smelled fire, and the aircraft started shaking uncontrollably," a CNN.com online commenter under the name of Augustus2002 said.

"The noise on board was incredible, we could not hear any of the announcements of the crew," he added.

CNN has not been able to confirm his account, but it matches a description from a Reuters photographer who was on the plane with his family.

The photographer, Beawiharta, who uses only one name, told the news agency that his 15-year-old son spotted flames out the window of the twin-engine Airbus A330, which was on the way to Jakarta, Indonesia, but turned back after the engine problems began.

"Panicked, he then asked: 'Will we die? Will we die?' " the photographer recalled.

The atmosphere among the plane's 136 passengers quickly changed to a "surprising calm," Augustus2002 wrote, as people began to pray.

"God, save our flight," they said, according to Beawiharta's account. "Give us your protection."

Flight CX715 landed safely, the airline said in a statement "following a stall warning" on one engine. No passengers were injured. The flight landed at Singapore Changi Airport, where it had originated.

"Fire services met the aircraft on arrival," Cathay Pacific's statement said. "The aircraft stopped on the taxiway and sparks from the No. 2 engine were reported. They were doused by fire extinguishers."

Cathay Pacific and Rolls Royce, the maker of the engine, have launched an investigation into the incident, which has been reported to the Hong Kong Civil Aviation Department, the airline said.

"We are aware of the incident and working closely with our customers to provide support and technical assitance," Rolls Royce said in a statement.

Several tires deflated as the aircraft landed at high speed with severe braking, the company's CEO said at that time.

Less than a month later, an Airbus A330 plane operated by Afriquayah Airways crashed just before landing in Tripoli, Libya, killing all but one of the 104 passengers on board. Shortly afterward, investigators said low visibility caused by mist and sand created poor flying conditions for the plane's pilot.

CNN's Ayesha Durgahee and Andrew Henstock contributed to this report.