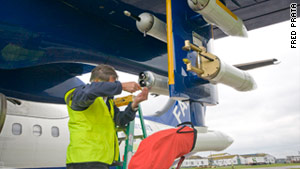 An engineer makes final checks on a BAe 146 aircraft fitted with the AVOID system for 'ground testing.'

The airline is hoping to try out its ash detection system -- called the Airborne Volcanic Object Identifier and Detector (AVOID) -- by flying a test aircraft through ash blasted into the atmosphere from the Grimsvotn volcano on Iceland that erupted on Saturday, disrupting hundreds of commercial flights.

AVOID uses infrared camera technology to detect ash in the atmosphere up to 100 km (62 miles) away says Fred Prata of the Norwegian Institute for Air Research, who developed the system.

Volcanic ash -- which is made up of rocks, minerals and volcanic glass -- can be a serious hazard to aircraft, reducing visibility, damaging flight controls and ultimately causing jet engines to fail.

The AVOID prototype consists of a cylinder 80 cm long with a diameter of 40 cm that is mounted on an aircraft wing. Data from the infrared sensors is sent to the pilots and also potentially flight control centers, allowing ground staff to build up a detailed 3D map of atmospheric ash, says easyJet. It plans to fly a test aircraft "as soon as possible."

Prata says: "This uses technology that has been employed in satellites for 25 years, but whereas they look straight down, this works horizontally which makes it more effective. At cruise altitude there is really no limit to how far ahead you can detect ash."

However, Prata says there are limitations to the system, for example it does not work as effectively when there is water vapor in the atmosphere, which is not normally a problem at cruising altitude, says Prata.

Ben Vogel, editor of Jane's Airport review, said: "If the effectiveness and cost-effectiveness of systems like this can be proven then they could be used widely on aircraft. They could even potentially be made mandatory by aviation safety bodies."

The system has the backing of the British Civil Aviation Authority (CAA). Richard Taylor, a spokesman for the CAA said: "It is an approach we are encouraging, we have said all along the airlines have to come up with a solution in collaboration with aircraft manufacturers."

EasyJet said it continues talking to the European Commission for funding to support research and development of the AVOID system with the eventual aim of mass production. It says it will share the technology with other commercial airlines.