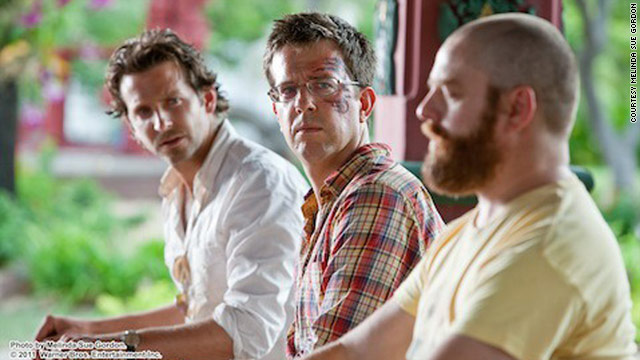 Fans of "The Hangover Part II" can take their own adventure through Thailand following the film's locations.
STORY HIGHLIGHTS

(CNNGo) -- After months of anticipation and cast speculation, "The Hangover Part II" finally hit screens in Bangkok this week. For anyone unfamiliar with the film, starring Bradley Cooper, Ed Helms and Zach Galifianakis, it is much the same as the previous one: a wedding, a bunch of blokes, alcohol, memory loss and a missing person.

Though instead of Las Vegas, this time it's set in Thailand. According to the film's producer, Dan Goldberg, Bangkok is "the last place in the world that these guys should be, which, of course, makes it the perfect place to send them."

Sure, red light districts may be a cliché here in the City of Angels, so they were bound to have a role in the film. But there are plenty more surprises as you follow the wolf pack on their sick night out.

"The different locations provide an interesting cross-section of the city," says "The Hangover Part II" line producer Chris Lowenstein, of Thailand-based Living Films. "Bangkok is essentially one of the characters in the movie, and we're trying to show how rich of a tapestry it is."

If you are looking to create your own "Hangover" night to forget, here's the insider's guide to the film's Thailand locations and characters. Don't worry, we left out the spoilers. 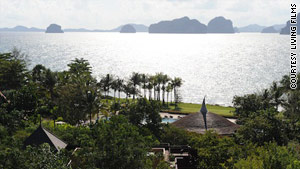 The Phulay Bay Resort and Krabi Ritz Carlton are featured in "The Hangover Part II."

The Scene: Wedding for Stu (played by Helms) and fiancée Lauren (Jamie Chung).

Amnesia has never been so pricey nor contracted at such a stunning venue -- online rates starts at 19,550 baht (nearly $650) during low season for a night at this more-than-five-star resort.

The Scene: Phil (Cooper), Stu and Alan (Galifianakis) wake up the next morning in a dirty hotel in Bangkok sans Teddy (Lauren's brother, played by Mason Lee).

The Action: Down this alley, best reached by taxi, you can still find bird's nest soup or buy some Chinese red lanterns to deck out your home.

Don't try to find the room they woke up in -- those "The Hangover Part II" scenes were filmed on Los Angeles sets.

Instead, enjoy an icy drink in a plastic bag while you wait for your rubber stamps to be engraved. Or, the lone wolf can take a prowl through vibrant Chinatown by following this mapped outwalking tour.

More on CNNGo: Places to avoid when hungover in Bangkok

The Action: Last time we checked there weren't any Capuchin monkeys nickel-and-dimeing in this 'hood near the river.

But it's a good place to sit and have a bowl of roadside guay tiow -- noodles -- as you imagine how location manager Somchai Sanitharangkun managed to close off all seven streets leading out from the one-tree roundabout for the filming.

To get there, take the Chao Phraya Express boat to the Ratchawong Pier and hang a right at Song Wad Road. 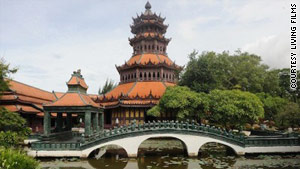 The Scene: In an attempt to recall the missing night, the boys are led to the Chinese temple of Ching Mei to meditate, and Alan has a juvenile vision.

The Action: Self-proclaimed as the "world's largest outdoor museum," Muang Boran offers a Cliffsnotes-esque what's what of Thailand's architectural monuments.

A sala was added to create the temple atmosphere for the film near the existing Phra Kaew Pavilion, which, as an Ayuttayan representation for Buddhism, is a fitting place to calm the mind.

And don't worry, stick-wielding Chinese monks -- as depicted in "The Hangover Part II" -- don't really live here. Entrance fees for foreigners are 400 baht (about $13) for adults and 200 baht ($6.50) for children, exclusive of optional golf carts, bicycles and guides.

More on CNNGo: Why Thailand can enjoy "The Hangover Part II" without shame

The Scene: At Siam Sam's Bar, things get a little crazy.

Film critic: This 'Hangover' not as fun
RELATED TOPICS

We can't provide links to any of the sites that review these places for obvious reasons, but a Google search will easily lead the way. Don't bother looking for the back room in search of extracurricular activities or try to escape through the back alley when you're chased by "ladies" of the night.

All that was filmed in Los Angeles and Chinatown respectively. If you are under 20 years of age or don't like the color red, loud music, or skimpy clothing, this place is not for you.

The Scene: A clue leads the wolf pack to a party street and barber shop, where the boys find themselves strangely unpopular.

The Action: This was the set of "The Hangover Part II" that Bill Clinton visited, but the bars and tattoo parlor purpose-built for the film are not there anymore. (Contrary to rumors, the ex-president does not have a cameo role in this movie).

Small restaurants and bars line this pseudo-red light district, so you can have a drink and reflect on how "dead-end" applies to more than just the soi. To get there, take the BTS to Nana station.

More on CNNGo: 10 easy ways to look like a tourist in Bangkok

The Action: The entrance to Bankgok's high-end Sirocco restaurant on the 64th floor of luxury hotel Lebua at State Tower provides arguably the most stunning views of Bangkok you can get, and was the site of several key scenes in the movie. The hotel's Tower Club was also turned into a film set during the shoot, with the landmark "golden dome" on top of the building making a few appearances as well.

To commemorate the film, the al fresco Sirocco restaurant and adjacent bar (sticklers for dress code) are offering Hangovertini cocktails for 490 baht to kickstart your night in style.

The hotel is also offering a special two-night "The Hangover Part II" package priced at US$2,200. Or fans can stay in Lebua's "The Hangover Suite," a three-bedroom luxury suite that sleeps up to six guests and has a fully-stocked mini-bar and ample party space.

More on CNNGo: 7 of Asia's best hotels with a view

What: The wedding band

Where: Ska Rangers is a quirky Thai band based in Chiang Mai. Give them a listen here. Two of their songs appear on "The Hangover Part II" original motion picture soundtrack, available on Amazon.com.

If you want them to provide the soundtrack to your big day, contact them via www.facebook.com/skarangers.

The Hangover Part II opens in theaters in the United States, Thailand, Australia and the United Kingdom on May 26, followed by Singapore and Hong Kong on June 2. Japan's opening "Hangover Part II" date is July 1.