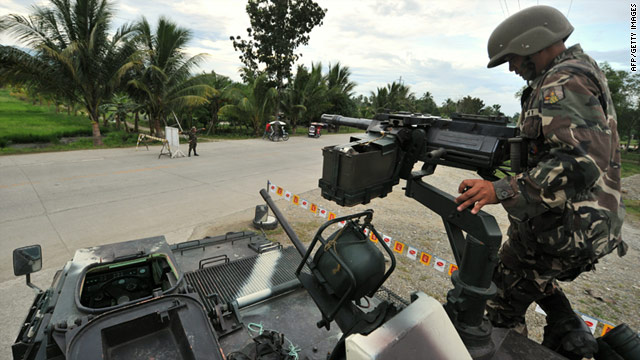 A Filipino soldier mans a checkpoint in 2010 on the island of Mindanao. The U.S. says the island is at risk of harboring terrorists.
STORY HIGHLIGHTS

(CNN) -- U.S. citizens should "exercise extreme caution" when traveling to the Philippines, the U.S. State Department said Tuesday in a statement.

"Targeted sites may be public gathering places including, but not limited to, airports, shopping malls, conference centers, and other public venues," said the statement.

The warning, which is an update from November, specifies the island of Mindanao and the Sulu Archipelago as particularly dangerous and at great risk of harboring terrorist activity. Manila might also be included, the statement said.

Because of election-related violence, the Philippine government declared a state of emergency in November 2009 for the Maguindanao and Sultan Kudarat provinces, as well as Cotabato City in Mindanao. This state of emergency is still in effect, according to the State Department.

Travelers should be aware of heightened police and military presence in these areas and of kidnap-for-ransom gangs that are active in the Philippines and target foreigners, the department said.

Mindanao is a predominantly Muslim autonomous region, set up in the 1990s to quell armed uprisings by people seeking an independent Muslim homeland in the Philippines, a predominantly Christian country.

In November 2009 at least 57 people were killed when their convoy was ambushed in Maguindanao. The former mayor of the province was accused of plotting the deaths to thwart a political rival.

The State Department issued a worldwide caution to warn U.S. citizens that terrorism can happen anywhere and urges those visiting the Philippines to register with the U.S. Embassy to be notified of emergencies, the statement said.