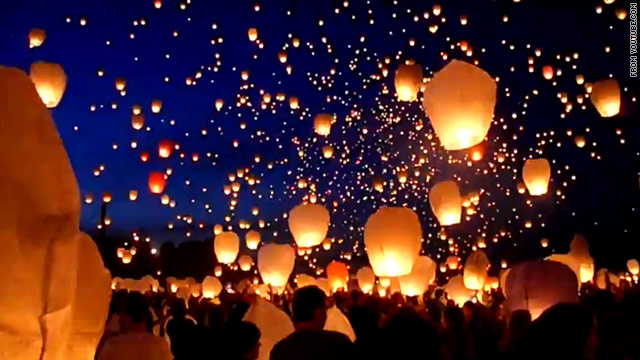 Thousands of paper lanterns float toward the sky in Poznan, Poland, on June 21, the shortest night of the year.
STORY HIGHLIGHTS
RELATED TOPICS

(CNN) -- On the shortest night of the year, the late-setting sun wasn't the only thing illuminating the sky over Poznan, Poland.

As part of celebrations to mark the official arrival of summer, crowds gathered near the Warta River last week and released thousands of paper lanterns into the air, resulting in a magical effect. Videos of the festival are just now getting attention online.

(Fans of the Disney movie "Tangled" may do a double take as the lantern-filled sky looked as if parts of animated film had come to life.)

The event was promoted on Facebook and billed as "Poznan's most romantic night." Participants were encouraged to buy the lanterns for 5 zloty each (about $1.80) and release them at exactly 10:30 p.m.

The goal: to beat Poland's previous record of lanterns launched into the sky at one time. Officials said that task was easily accomplished, estimating that more than 11,000 lanterns were released on June 21.

Organizers also hoped it would be enough to beat the Guinness World Record for the most lanterns flown simultaneously. (That honor is currently held by Indonesia with 10,318 lanterns.)

Plans are under way to organize an even bigger event in Poznan next year.