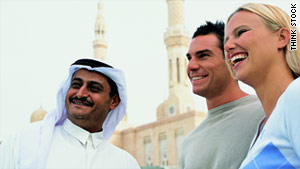 Learn to say "do you speak English" in the local language.
STORY HIGHLIGHTS
RELATED TOPICS

(MatadorNetwork.com) -- "YOU SEE, what we need here is some cleaning-up liquid, some disinfectant. Would it be possible for you to bring me some?"

The hostel receptionist, a petrified-looking Chinese woman in her twenties, nodded openmouthed and started typing something, anything, into the computer at her desk. It was so palpably uncomfortable, I started blushing for her.

The complainer, a British backpacker who had spilled heaven-knows-what in her room, looked at me in confusion.

"She understood that, right? I mean, I was pretty clear. I mean, she works in a hotel. She should understand what I'm asking, right?"

The next year, in an expat pub with my Korean coworker Flora, a Canadian friend of mine approached the table. I introduced him to my pretty colleague.

"Hiiiii Flora," he said slowly, waving his hand back and forth. "My. Name. Jacob." She nodded her hello, and he beamed a big children's TV host grin.

"a drink?" (mimes swigging from a bottle) martini

Flora volleyed back in her fluent English. "Actually, we just bought some drinks, so maybe another time."

"English" (talking motion with his hands)

MatadorNetwork.com: How to say 'cheers' in 50 languages

Most travelers have witnessed these awkward English exchanges. In the former example, the woman seemed to assume that anyone working at a hotel must speak fluent (rambling) English. In the latter, the man's simplified language and charades were so over-the-top, he came across as patronizing. Doesn't every traveler have a story like this? A glad-I'm-not-like-that-jerk tale?

It's easy to roll one's eyes at these obvious gaffes and grumble about ignorance, but it's not easy to navigate a language barrier. Is it presumptuous to try and communicate in fluid English when abroad? Is it condescending to simplify your speech when talking to a non-native English speaker?

The "issue" here is hard to pin down. Some travelers believe it's their responsibility to learn the local language when they go to a foreign place. Some believe that, with English being learned all over the world, it's realistic to assume they will meet English speakers anywhere.

Some folks feel deeply awkward in these exchanges, worried about imposition or offense. Some feel the opposite, that tourism is what it is, there's a lot of economic good coming from the industry, and no one should feel guilty about not speaking the local language.

Mostly, the awkwardness arises in knowing (or not knowing) how to modify one's speech when talking to someone who isn't fluent in your language.

There are no cut-and-dried methods for easy communication, as so many factors are at play (fluency, shyness, cultural beliefs and behaviors, to name a few). I have though, in my travels, picked up a few tips that can make a difference.

Most of us know the ugly stereotype of the tourist shouting in mockingly slow English at a hapless waiter or concierge. We know that embarrassment from hearing "DOES ANYONE UNDERSTAND ENGLISH?" yelled from the impatient mouth of a fellow traveler.

I'd call that the "wrong way" to figure out if the person you're addressing speaks English.

So is there a right way to open a conversation?

In my experience, when traveling to a foreign country, learning how to say "do you speak English" in the local language can help a lot. Approaching someone with English, especially outside a touristy locale, puts them on the spot to respond in English.

In travel, I've unwittingly forced a lot of uncomfortable people to stammer out "umm....English...no" before scooting off. I've learned that it's a lot less awkward to use their native tongue, even for one basic phrase, so the person you've approached has the option to simply shake their head.

MatadorNetwork.com: The sexiest accent in English

A fact to bear in mind is that for most language learners, their comprehension is stronger than their output. This means that while a non-native English speaker may communicate in basic phrases, they can hear and follow spoken English better than you think.

When conversing, you don't need to pare down your thoughts into Tarzan-speak just because your buddy uses very simple sentences.

This doesn't mean you can speak as breezily as you would back home. Your communication should be comprehensive enough if you are speaking clearly and phrasing your thoughts in a simple way ("can you..." instead of "well, if you could possibly arrange...").

MatadorNetwork.com: How to avoid being an ugly American tourist

Living and traveling in East Asia, almost every encounter I've had with a local person involves some humility. "I don't speak English well," is a phrase that foreigners hear constantly, from the English Language PhD candidate in Guangzhou to the mother raising bicultural kids with an Australian dad in Korea.

Their English is usually far more advanced than they claim, and this humility is more cultural than literal. What's more, in cultures where saving face is important, people are incredibly worried about making a language slip-up, and will sometimes hesitate to speak for that reason.

When speaking to someone in English, don't give up if the conversation is choppy at first. Often, shyness is the culprit, and they will loosen up in the company of a friendly conversation partner.

Sometimes, they haven't spoken English in a while, and it takes a few minutes to get back into the rhythm of fluid speaking. If someone is trying to converse, even if they're struggling a bit, I'll give them my time and patience as much as possible.