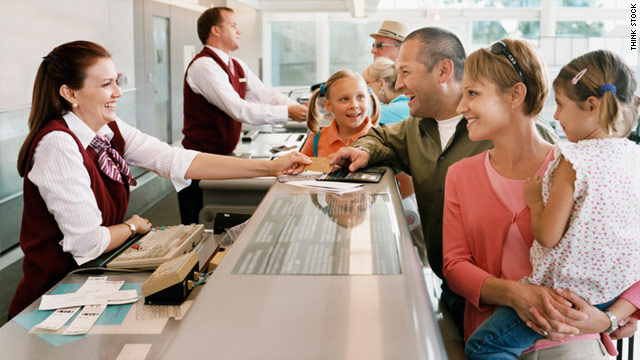 There's never a way to guarantee you'll be on time, but there are ways to lessen your chances of being delayed.
STORY HIGHLIGHTS
RELATED TOPICS

(CNN) -- You're all packed and ready to go, but when you get to the airport, you find that your airplane isn't: Your flight is delayed.

That's not how you want to start your trip (or end it, for that matter), but there are ways to lessen the chance that you'll be stuck on the ground for long.

The fact that airlines are considered to have perform well if "only" a fifth of their flights are delayed shows just how complicated this industry is.

With weather, mechanical issues, airspace congestion and even things like crew scheduling getting in the way, running on time 80% of the time is good. The key is figuring out how you can make sure you're on those 80% of flights.

Although there's never a way to guarantee you'll be on time -- mechanical issues can strike anywhere -- there are ways to lessen your chances of being delayed.

When booking your flight, try to fly in the morning. Airlines generally have the ability to "reset" the system over night. No, they don't flip a switch, but a lot of airplanes spend the night on the ground, doing maintenance, etc.

So morning flights have a higher likelihood of going on time. By the time the afternoon rolls around, a day of delays and problems may have caught up. Severe weather is also more likely to be a problem in the afternoons during thunderstorm season.

Want proof? Take a look at the Department of Transportation's monthly report.

The one caveat to this rule? You might want to reverse your flying in San Francisco. San Francisco sees nasty delays when the fog rolls in, and that tends to be more prevalent in the mornings. So try afternoons into San Francisco.

You can also look for historical data on your specific flight to see how it generally performs. U.S. airlines are now required to show you on time performance when you're booking a flight, and that can show some interesting trends.

You can also go to FlightStats.com for a comprehensive look at historical performance of every flight. It is important to keep in mind, however, that past trends aren't a guarantee. Anything can delay your flight on any given day.

The last thing to consider is airport choice.

Certain airports are known as the delay capitals of the world, and most happen to serve New York. Newark, JFK and LaGuardia all tend to sit toward the bottom of the pack in terms of on time performance, so you may want to consider White Plains if you're heading north of the city or Islip if you're on Long Island. For most, however, there aren't great alternatives in New York.

San Francisco is often down there as well with its foggy days, but it has good alternatives in Oakland and San Jose, depending on where you're going. If you're on a connecting flight, it's even easier to avoid some of these hot spots.

Other airports can have seasonal issues. Dallas/Fort Worth can get those nasty spring and summer storms that snarl operations, as can Atlanta. Chicago's O'Hare can be tough at any time of year, but its recent opening of a new runway, with more on the way, has eased congestion.

In general, when the weather goes south, airlines have to look at canceling and delaying some flights to thin out the schedule. The flights from smaller towns tend to get impacted more, while international flights have priority. That's another thing to keep in mind.

In the end, it's important to remember that there's no way to completely avoid delays. If, however, your schedule is flexible, there are ways to improve your odds.