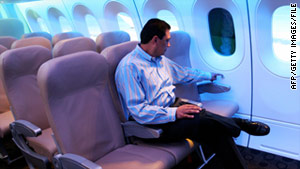 The windows in the new Boeing 787 are larger and equipped with dimmers rather than shades.
STORY HIGHLIGHTS

(CNN) -- The long-delayed and much-awaited Boeing 787 aircraft has finished testing and will see its first customer delivery next month to All Nippon Airways. Soon, you'll be able to hop on board this bird yourself, but would you even know it if you did?

Aircraft manufacturers like to promote the greatness of their new airplanes when it comes to passenger comfort, but many of those promises require the airline to actually configure planes the way the manufacturer suggests. That usually doesn't happen, despite grandiose ideas.

With the 787's entry into service approaching, I thought it would be a good idea to take a look at some of the promises of the 787 to see which will actually hold up.

This is a favorite myth of any new airplane. When the 747 first came out, it had lounges with pianos. Then the airlines realized that they needed a lot more seats to make more money on each flight, and the lounges disappeared. This time, there was a lot of talk about more personal space, but that's really at the whim of each airline.

Boeing originally pitched the 787 with eight seats across in each row in coach, but many airlines have already opted for nine seats across. Legroom will only be as generous as the airline wants; it's not determined by the manufacturer. So I wouldn't look for anything radically different in this area.

You'll be able to get a better view: True

One thing that airlines can't reconfigure is the size of the window. The 787 has windows that are 19 inches high, and overall 65% larger than what you'll usually find on an airplane. There haven't been windows this big since the DC-8, an airplane that hasn't seen widespread passenger use in more than 20 years. That means you'll have a better view when you fly.

Window shades are no more: True

Another interesting piece of news around the windows: Window shades will not be offered. No, this isn't a Ryanair-style money-saving tactic but rather a technological advance. Instead of window shades, there will be dimmers on the windows. If you're like me, you've been annoyed when others want the shades closed and you just want to watch out the window. Now you can put the dimmer on and get the best of both worlds.

Everybody knows that general "bleh" feeling that you have when you walk off an airplane after a long flight. That's because the cabin is pressurized to a fairly high altitude -- around 8,000 feet. The 787, however, will be pressurized to 6,000 feet, and that means your body won't have as much trouble adapting.

No bag? Then airlines should refund fee

Turbulence will be a thing of the past: False

While it's true that you'll still feel turbulence on the 787, Boeing has been working hard on new systems to help minimize the impact. There are systems that work to counter vertical and horizontal movement in turbulent air, and every new aircraft sees improved systems in that regard. So yes, you will still feel turbulence but the impact should be lessened on this airplane when compared to previous generations.

Beyond this, we will see things like larger overhead bins and mood-lighting, improvements that have rolled out on other current Boeing models.

Though the first delivery is to ANA in Japan, United will start taking delivery of the first of 50 new 787s early next year. Look for this airplane to begin flying long haul routes with lower demand (like United's Houston to Auckland flight) in the near future.

Will this airplane offer a better passenger experience? Yes. But it may not be the revolution you'd like.