'Blind' man to sail around the world alone 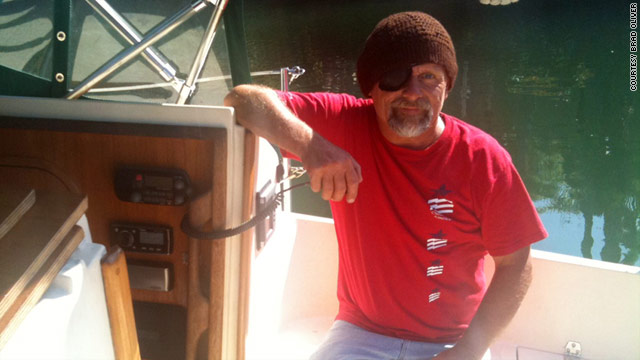 Dennis Howard is preparing for a solo voyage around the world.
STORY HIGHLIGHTS

(CNN) -- Veteran sailor Dennis Howard is preparing for one of the most challenging journeys of his life -- a solo voyage around the world.

But on top of all the dangers associated with such a trip, including sleep deprivation, stormy seas and the threat of pirates, the 62-year-old American has an additional challenge to face.

After suffering a severe form of glaucoma, which causes damage to the optic nerves, Howard had his right eye removed and lost most of the vision in his left.

To see what I see you can cover you're right eye and then look through a drinking straw with the other.
--Dennis Howard.

"My doctor estimates around 5% of my vision remains," he said. "To see what I see you can cover your right eye and then look through a drinking straw with the other -- that's what I see.

"I can read a license plate from across the road, I just can't see the car," he continued.

He plans to depart on his specially designed 20-foot (6.1 meter) boat the "Avalo" from San Diego, California, in late October. The voyage is expected to take around one and a half to two years, with Howard hoping to end the journey in France.

Although he admits it will be difficult, Howard sees the voyage as an opportunity to show others that disability needn't be a barrier.

"After I lost my sight I didn't go into the tailspin of despair and fear," he said. "But what I immediately gave up on in my head was sailing. I just thought, 'well, I'll never do it again.'

"But the more I thought about it, the more I realized I just had to change the way I sail ... I want people to realize that they shouldn't just give up."

But for Howard to get this far has not been easy. In order to get back in a boat, let alone sail around the world alone, he has had to learn how to sail all over again.

He said: "It would be false to say there is no additional challenge for me, but I put it in the realm of degrees of difficulty.

"I had to re-learn how to cross busy streets without a disaster after I lost so much vision and I am doing the same with sailing.

"There are the usual concerns about the boat and equipment; it would be foolish to not recognize the reality that things break and a thousand or two miles out at sea, these things can turn catastrophic. So I've spent more than a year reducing those chances."

Despair can become overpowering if you let it.
--Dennis Howard.
RELATED TOPICS

Howard's 20-foot boat has not only been re-fitted in order to make sailing easier, it is also equipped with essential technologies to ensure the safety of both Howard and other sailors, including an Automatic Identification System (AIS), which alerts Howard to ships within a 50-mile radius.

"It's great, it shows me exactly where the ship is, what its course is, how fast it's going and what its name is," he said.

As well as being tailored to Howard's needs, the "Avalo" has been redesigned to be as eco-friendly as possible. The boat's diesel engine has even been replaced by a small outboard charged by solar panels.

"The boat is about as green as it's possible to get. All of my equipment onboard from my radio communications to my navigation equipment is powered by wind and solar-generated power," he said.

Throughout his trip Howard will be in regular contact with a group of schoolchildren in Ohio who also live with disabilities.

"I'm hoping along with the educational information about weather, science and geography, these kids who are starting off in life with a particular difficulty can look at this and think they don't need to be limited in what they do."

Asked what his greatest concern was before the trip, Howard answered: "It's not the sea, it's not the storms, the pirates or even my eyesight -- it's my mental state.

"Despair is a common human emotion," he continued. "At sea for months under conditions of deprivation and occasional terror, and with no one with whom to interact and commiserate, despair can become overpowering if you let it."

But Howard is convinced it is all a price worth paying.

"Those who have never sailed in blue water, particularly alone with the moon and stars and phosphorescence and wildlife and the majesty of the ocean would have to struggle to appreciate how beautiful it is."