As Muslims suffer from loss of air travel freedoms, others do, too

By Nafees A. Syed, Special to CNN 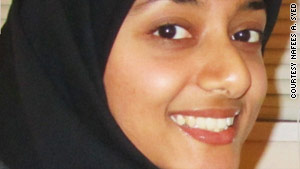 We have lost the simple joys of air travel, Nafees A. Syed writes.
STORY HIGHLIGHTS

Editor's note: Nafees A. Syed is a J.D. candidate at Yale Law School with a B.A. in Government from Harvard University. She previously worked as an aide to a member of Congress and on the U.S. House of Representatives Judiciary Committee.

(CNN) -- It wasn't until a recent trip to the National Air and Space Museum that I grew to appreciate what we have lost in the past decade of suffocating airport security.

I gazed at the vestiges of American aerial power, from the slim Wright Flyer to Amelia Earhart's glowing "little red bus." These were symbols of American ingenuity and innovation that led to incalculable transformation of the modern world.

We live in an era punctuated by nostalgia -- for our vibrant economy, our reputation -- and now we can add American aviation to that list. This realization especially affected me as an American, since we have lost the simple joys of air travel in the pollution of suspicion and fear.

A colleague once joked about how bizarre our airline experience has become.

"When the metal detector went off at the Scottish airport, I joked to the security personnel that it was because of my heart of gold, and we laughed. In America, they probably would have ripped my chest open and shouted 'Where?' "

This made me contrast my headache-free experience in European and Asian countries with my experience in my own country's airports.

Everyone can probably relate to this now, Muslim or non-Muslim, but the American airport experience is much more harrowing if you have one or more of the following traits: a noticeably Muslim name, a noticeably Muslim appearance (i.e. a head scarf), or a tan (note: by default, most of the world's population).

In my case, I am all of the above.

This means that I make ostensibly ridiculous precautions. I pack nothing that has foreign language on it or is of value -- I will get extra screening and there have been enough Transportation Security Administration thefts to make me wary.

If you think we're paranoid, look up some of the crazy things that have gotten Muslims even kicked off of planes -- a T-shirt with Arabic script, a head scarf and more. Ask your Muslim friends how many times they've had to buy new luggage because their checked suitcase is returned, slashed, with a note from the TSA saying, "Your bag has been randomly chosen for an inspection."

Other "random checks" include almost certain head-and-chest checks, hand swabs, invasive searches and pat downs including "sensitive areas of the body," and even a blunt admission by TSA representatives that it's because you're wearing the Muslim covering.

Sometimes, dinner conversations post-flight can be a competition to show off battle scars, usually with Muslim women winning. We will show off about the great lengths we go through not to travel by plane -- even planning elaborate road trips and bus-train sequences.

Such anxious overreaction from passengers and security personnel is not surprising, given the ludicrous rumors and misinformation that are spread in homes, schools and even police stations across America. But discriminating against a few, no matter how specialized it may seem, erodes the rights of the entire population.

Though Muslims still face the brunt of airports' intrusive policies, they are affecting everyone. In 2008, air travelers avoided 41 million trips, costing our economy more than $26 billion, according to the U.S. Travel Association. Over the past couple of years, frustrations have increased, and 61% of likely voters oppose the new security measures, according to Zogby.

Now other passengers treat me not with suspicion but with commiseration. After experiencing the invasive searches themselves and the almost-as-invasive body scanners, after hearing reports of the medical risks and ineffectiveness of TSA procedures, Americans are reacting to how painful the airline experience has become. Especially after the Chertoff scandal, some in Congress, which created the TSA, are calling it a failure.

My first thought is an emphatic, "We've been saying this for years." And the intangible things we've lost dishearten me.

When I see a little boy, afraid of going through security alone, being barked at by a TSA officer, I wonder where the mercy and kindness of our society have gone in the name of national security. I wonder if the little boy will ever appreciate the thrill of flying with the birds and clouds as I did when I was young.

The TSA needs to orient its policies around working for passengers, not against them.

Security procedures need to be implemented with logic and analysis, and tested before being used on passengers.