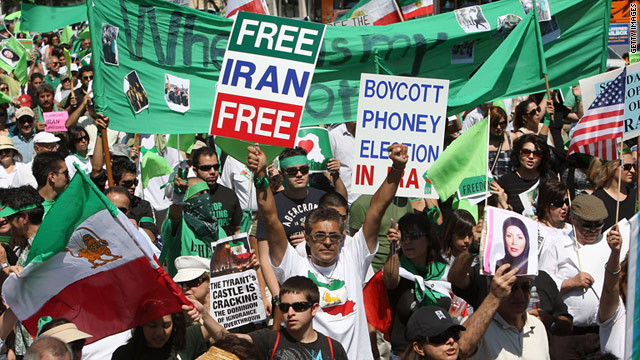 Nasrin Sotoudeh represented many of the people detained in the wake of the disputed 2009 presidential elections in Iran.
STORY HIGHLIGHTS
RELATED TOPICS

(CNN) -- The United States said Monday it is "dismayed" by the 11-year prison term reportedly handed down for an Iranian human rights lawyer and urged her immediate release.

Nasrin Sotoudeh's sentence included five years for "acting against national security," another five years for not wearing a hijab -- a headscarf worn by Muslim women -- during a videotaped message, and an additional year for "propaganda against the regime," the International Campaign for Human Rights in Iran reported over the weekend.

"The United States strongly condemns the unjust and harsh verdict against human rights activist and respected lawyer Nasrin Sotoudeh in Iran, and calls for her immediate release," Crowley said.

"Her conviction is part of a systematic attempt on the part of Iranian authorities to silence the defense of democracy and human rights in Iran," he added. "It is one in a series of harsh sentences targeting the lawyers of Iran's human rights community, which perseveres despite threats, torture, and imprisonment."

Sotoudeh served as a defense lawyer for many of the people detained in the wake of presidential elections in 2009. As part of her sentence, she is also banned from practicing law or traveling for 20 years. Crowley said U.S. officials were "dismayed" by the ban.

The attorney was arrested on September 4 and has been held in solitary confinement, according to a statement from Reporters Without Borders.