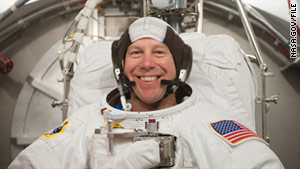 (CNN) -- Injuries from a bicycle accident could change a NASA astronaut's duties on Space Shuttle Discovery, the agency said in a statement.

Mission Specialist Tim Kopra was injured in a bicycle accident Saturday, NASA said. The agency said he "will be OK," but did not release further details, citing medical privacy.

But it said the impact the accident would have on Kopra's shuttle duties "is being evaluated."

He is scheduled to be on the Discovery mission to the international space station, slated for February 24.

Kopra was selected as an astronaut in 2000, has previously been aboard two shuttle missions, and spent one tour of duty on the international space station.