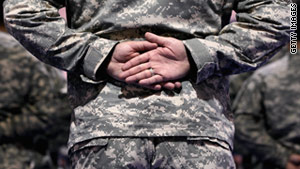 Suicides among active-duty soldiers declined for the first time in six years, but doubled in the Army National Guard.
STORY HIGHLIGHTS
RELATED TOPICS

Washington (CNN) -- The U.S. Army announced Wednesday that the number of suicides rose again last year to almost one a day, despite major efforts to identify and help at-risk soldiers.

Suicides among active-duty soldiers actually declined for the first time in six years but the numbers increased among other soldiers, doubling in the Army National Guard.

The overall number of suicides for the 2010 calendar year was 343 -- an increase of 69 over the previous year -- and included self-inflicted deaths among active-duty soldiers, the National Guard, the Army Reserves, civilian employees of the Army and family members. The Army reported 156 active-duty suicides last year and 112 in the National Guard.

"The bottom line is this is a significant issue and clearly there is much to be done," Army Vice Chief of Staff Gen. Peter Chiarelli said in a Pentagon briefing.

While active-duty and deployed soldiers are under constant observation and supervision, soldiers serving in the Reserves or National Guard who are not deployed may be off the Army radar for weeks at a time.

"The reality is we are able to more effectively influence those soldiers serving on active duty and help mitigate the stressors affecting them. Conversely it is much more difficult to do so with individuals not serving on active duty." Chiarelli said. "They are often geographically separated, removed from the support network provided by the military installations. They lack the ready camaraderie of fellow soldiers and daily oversight and hands on assistance from members of the chain of command."

For the National Guard, reasons for the suicides remain unclear and are not necessarily related to the stresses of war-fighting or finding work in a bad economy.

Carpenter said the solider suicide rate maybe a reflection of the problem for society as a whole, with Army suicides part of a national trend. Army suicides are less than one percent of national total, based on latest national suicide-rate numbers, which are from 2007, according to Chiarelli. Problems with relationships, substance abuse, the stresses of multiple deployments to the war zones of Iraq and Afghanistan and other factors may all contribute.

"As we do the analysis, it is not a single thing. It is a combination of a group of things that come together," Carpenter said.

Chiarelli said a tour in the U.S. Army puts a young American under as much stress in six years as civilians may experience in a lifetime. "I'm frustrated at every single suicide, every one is briefed to me, I receive reports in 36 hours on each one them," he said. "I see the similarities; I see the differences."

But he predicts new treatment and mental health evaluation programs and new awareness among military leaders will turn the trend around.

"I hope you are going to see these numbers go down significantly in the coming year," Chiarelli said.