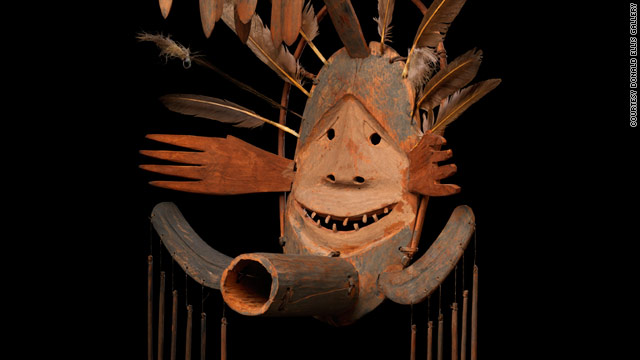 (CNN) -- Facial protrusions that look like hands; dangling sticks and feathers; a wide and mischievous grin: It's no wonder this rare Eskimo shaman's mask was so precious to the Surrealists.

And now a price has been put on the value of the Donati Studio Mask -- it was sold for over $2.5 million Thursday to a U.S. collector.

It breaks the previous record for indigenous U.S. art sold at public auction, said a spokesman for the Winter Antiques Show in New York, where the mask was sold.

A second mask sold for more than $2.1 million to another private buyer from the United States.

The late 19th century Donati Studio Mask was discarded by its original Yup'ik Eskimo maker once its part in a ritualistic dance was over. Surrealist painter and sculptor Enrico Donati added it to his collection in 1945.

The mask remains today one of the best-known and rarest shamanistic masks of the Yup'ik, an Alaskan indigenous people.

These elaborate headpieces, which were created by the Yup'ik shamans for special dances performed to bring good weather, are said to have inspired the work of Donati and other surrealists including the writer, Andre Breton.

"Breton famously said that the first time he saw a Yup'ik mask, he was angry and said 'These are more surreal than we are,'" said Donald Ellis, a dealer in the field of antique North American Indian art based in Dundas, Ontario.

"They were essentially conceptual works of art and I believe the Surrealists understood that," he said.

The Donati masks have never been publicly displayed before but Ellis is bringing them to the Winter Antiques Show in New York which runs from Friday 21 to Sunday 30 January.

This and other "weather masks" were purchased from Yup'ik people at the beginning of the 20th century by the Kuskokwim trader and field collector Adam Hollis Twitchell. Many of the masks have ended up in major museums across the world.

Oliver Wick is the curator at the Beyeler Foundation in Switzerland, which holds a mask related to the Donati masks. He said that the late modern art collector Ernst Beyeler wanted the mask and other tribal objects to be shown alongside modern art in order to show the parallels between the two.

The mask in the Beyeler collection can be manipulated and change form, a factor, Wick said in "why surrealist artists got interested in these pieces," as well as the fact that they suggest "a dream state."

"Surreal collecting was a kind of wunderkammer, or marvel's cabinet (cabinet of curiousities), where they gathered all kinds of things that had a certain inspiration," he said.

Though undoubtedly important to the development of the Surrealists' aesthetic, the importance of these masks to the Yup'ik peoples, who lived in harsh, contingent circumstances, was much greater.

Ann Fienup Riordan is a cultural anthropologist based in Alaska, and author of book "The Living Tradition of Yup'ik Masks."

She said that the masks were used to "to request an abundance for the years to come" -- be it good weather, game or driftwood.

After the performance, she said, the masks would be destroyed. "This was a prayer that was done, and they finished it by either burning (the mask) or laying it out on the tundra, and then they would be remade every year for the next dance," she said.

Riordan, who works closely with Yup'ik people and elders, said that they were glad that museums had managed to keep some specimens.

"They were really grateful and expressed their gratitude to the museums for saving these pieces because if the museums hadn't, they wouldn't be there," she said.

Prior to the sale, Ellis said that several institutions have expressed an interest in purchasing the masks and other Yup'ik objects, but that museum funding is currently an issue. He predicted that the mask's aesthetic qualities, coupled with Donati's ownership, would have modern art collectors very interested.

"I can tell you almost all of the major masks I have sold in my career have been not to tribal art collectors -- they've been to modern collectors," he said.

He told CNN via email that he hoped the masks will be purchased by a museum or a wealthy collector who can donate them to the Yupiit Piciryarait Cultural Center and Museum in Bethel, Alaska.

"It would be fantastic if this mask would be available to the Yup'ik community for future generations in a museum," he said.