Stolen Edgar Degas painting to be returned to France 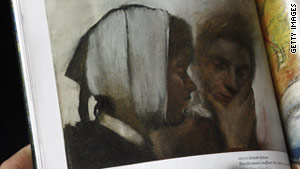 New York (CNN) -- A 19th-century artwork by French artist Edgar Degas will be handed back to the French government Friday -- nearly four decades after it was stolen.

The painting, "Blanchisseuses souffrant des dent" ("Laundry Women with Toothache,") was taken in 1973 from the Malraux Museum in Le Havre, in Normandy, France, the U.S. District Attorney in Eastern New York said.

It had been on loan from the French government, which considers the painting a national treasure.

The piece did not resurface until October this year when it appeared in a catalog from the auction house Sotheby's, it said.

The U.S. Immigration and Customs Enforcement and the French government will take part in a repatriation ceremony at 1 p.m. at the French ambassador's residence in Washington D.C. to return the painting.

Grelsamer said his father gave him the painting as a gift, but was unaware that it was stolen, the statement said.

Sotheby's said they had nothing indicating that the painting was stolen, saying it did not appear in any of its lost art databases, said company spokeswoman Diana Phillips.

The auction house had a longstanding relationship with Grelsamer without incident, she added.

"Sotheby's is happy to have been able to be involved in this discovery, and we are pleased that this painting will be returned to the government of France," Phillips said.

The U.S. District Attorney office says that Greslamer intends to seek compensation for the painting.

"The return of this masterpiece to the French government reflects our commitment to ensure the return of stolen artwork and cultural patrimony," it said in a written statement.

The painting reflects a break from the academic focus of Degas' early years when he dedicated himself to the "search for the essence of modern life," said Sotheby's spokeswoman Lauren Gioai.

"The 1870s gave rise to some of Degas most celebrated works," she said.