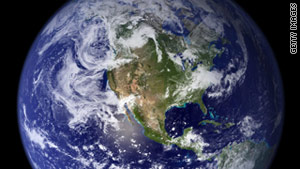 The five planets, like Earth, are in the habitable zone, which is a distance from their suns where liquid water could exist.
STORY HIGHLIGHTS

(CNN) -- Are we alone in the universe? Findings by NASA's Kepler space telescope are making that seem less likely.

NASA scientists have announced Kepler has spotted five planets about the size of Earth, orbiting stars in our galaxy.

These planets are orbiting in what is known as the habitable zone, which puts them at a distance from their suns where liquid water could exist. Liquid water is a key ingredient for life to form.

"In a generation we have gone from extraterrestrial planets being a mainstay of science fiction, to the present, where Kepler has helped turn science fiction into today's reality," said NASA Administrator Charles Bolden.

That star is some 2,000 light years from Earth.

To date, the telescope has detected more than 1,200 planet candidates. The fact that so many planets have been found in the Milky Way galaxy "suggests there are countless planets orbiting sun-like stars in our galaxy," said William Borucki, Kepler's principal investigator.

Kepler does not actually see the planets themselves. The telescope sees tiny decreases in light from the stars as planets transit across their suns.

The five Earth-sized planets are orbiting stars cooler and smaller than our sun, and further analysis is still necessary to officially confirm they are planets.