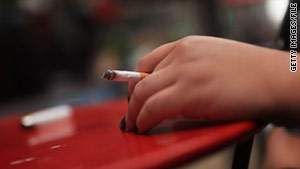 The ban is intended to prevent the harmful effects of secondhand smoke on children, officials say.
STORY HIGHLIGHTS
RELATED TOPICS

Nine years after the Big Apple banned smoking in its restaurants, the New York City Council on Wednesday voted to ban smoking in city parks and on city beaches, Mayor Michael Bloomberg said in a written statement.

The council voted 36 to 12 in favor of the ban, much to the chagrin of those who think the government is overstepping its role into its residents' lives.

"The city is taking it too far. I think it's ridiculous," said 25-year-old New Yorker George Wells as he pressed a lit cigarette to his lips outside the Shops at Columbus Circle.

The ban prohibits smoking in all 1,700 city parks and on its 14 miles of beaches, the statement said, and is intended to prevent the harmful effects of secondhand smoke for children.

"This summer, New Yorkers who go to our parks and beaches for some fresh air and fun will be able to breathe even cleaner air and sit on a beach not littered with cigarette butts," Bloomberg said.

The measure is expected to take affect 90 days after Bloomberg signs the bill. He has 30 days to sign the ban following the council's approval.

But Council Member Robert Jackson, who opposed the bill, said the ban is "going against our liberty of the people of New York City. As someone who wants to breathe clean air, I think we are going too far and being intrusive."

In 2003, a ban designed to protect workers outlawed smoking in New York City's 13,000 bars and restaurants, with very few exceptions and with stiff fines. The penalty for a first-time offense began at $200, and businesses caught repeatedly allowing smoking ran the risk of being shut down.

Meanwhile, a measure in California that would have banned smoking in all state beaches and parks was vetoed earlier this year by cigar aficionado then-Gov. Arnold Schwarzenegger.