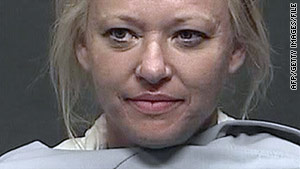 Shawna Forde was a member of the Minuteman corps before being removed for what was described as unstable behavior.
STORY HIGHLIGHTS
RELATED TOPICS

Tucson, Arizona (CNN) -- Brisenia Flores arrived in her rural Arivaca, Arizona, home with her parents, Raul Flores and Gina Gonzales, on the evening of May 29, 2009.

The family had spent the day shopping for Brisenia's new shoes about 60 miles northeast in Tucson, her mother testified this week. The 9-year-old girl had just finished the third grade and needed the shoes for summer camp that was about to start, her mom told jurors.

Brisenia went to bed on a couch in the living room so she could sleep with her dog, which wasn't allowed in her room. She fell asleep watching television as her parents slept in their bedroom.

A few hours later, she opened her eyes to the sight of her father, lying on the opposite couch. He had been shot in the chest and was choking on his own blood, her mom testified. Her mother was bleeding on the floor, a gunshot wound to her leg. The little girl was startled and cried out to intruders in her home, "Why did you shoot my mom?"

Gonzales described that scene to jurors in a Tucson courthouse this week in the capital murder trial of Shawna Forde, accused of being the ringleader of the fatal raid in the early hours of May 30. The trial, now in its second week, could last through the rest of the month.

Gonzales testified that four people knocked on the door, claiming to be law enforcement and border patrol. They said the house was surrounded because they had information that the family was harboring fugitives. Gonzales said her husband opened the door and allowed them inside, but they knew immediately that the people entering were not law enforcement at all.

She described a short, heavyset woman, a "super- tall" white male and two other Spanish-speaking men as the people in her home.

Gonzales says that after a short struggle, the tall man shot her husband several times in the stomach and chest before turning the gun on her. She was shot in the leg and fell to the floor when she heard her husband choking on his own blood. She says he could hear the gunman reassure Brisenia, who was awakened by the blasts of the weapon, that she wouldn't be hurt.

"She was really scared. Her voice was shaking," Gonzales cried as she testified in the witness stand. "I know she's crying and really scared."

Gonzales says her daughter began to question why her mother and father were shot when the gunman reloaded his weapon. "I can hear her say 'Please don't shoot me,' " Gonzales said, wiping away tears and sobbing.

The gunman paid no attention to her pleas and fired two shots into Brisenia's head, causing the girl to fly back on the couch, Gonzales recounted. She said she could hear her daughter struggling to breathe as the intruders began to steal items and leave the home. Gonzalez made her way to a weapon her husband kept in the kitchen and called 911.

The emergency call recorded the moment that the intruders re-entered the home, realizing that Gonzales was still alive. A series of gunshots can be heard as Gonzales fires the weapon in self-defense. One of the intruders was shot before they all left the home.

Flores and his young daughter, who just minutes before had been sleeping peacefully on the couch, were both dead.

Prosecutors say Forde, a vigilante anti-illegal immigration activist, was not only the woman described in the home but was also the ringleader of the home invasion and murder.

Forde was once a member of the Minuteman Civil Defense Corps before being removed from the group for what members described to CNN as unstable behavior.

Saying the federal government has failed to secure America's borders, the Minuteman group took the job on itself and claims that its mission is to employ "civil protest, demonstration, and political lobbying" in protecting borders.

She formed a splinter group, Minutemen American Defense, and patrolled the Arizona-Mexico border armed with weapons. She led protests about the dangers and criminal activity along the porous border.

Prosecutors say Forde planned the raid and the murders in an elaborate plan to steal drugs, weapons and money to help fund her new anti-illegal immigration group. They allege that her accomplices were Jason Bush and Albert Gaxiola.

Bush, who is said to have been the gunman, was the national director of operations for the Minutemen American Defense. It's claimed that Forde brought Gaxiola into the plan to raid the home because he had inside knowledge that Raul Flores had drugs in the home. Flores had a history of drug-related offenses, but no drugs were found in the home.

During opening statements, the state laid out the case against Forde, who has pleaded not guilty. Prosecutors allege that jewelry taken from the home was found in Forde's possession, blood from the scene and a van used in the robbery came from Jason Bush and that text messages sent from a phone registered to Forde implicate her in the crime.

All three are charged with first-degree murder. If convicted, Forde will face the death penalty. Bush's trial is scheduled for March, and Gaxiola is set to go on trial in June.