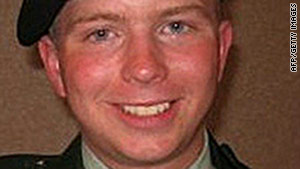 A friend of Pcf. Bradley Manning says Manning is deteriorating physically and mentally in prison.

Washington (CNN) -- A U.S. lawmaker said he requested Friday a visit with the Army soldier accused of leaking classified documents to the WikiLeaks website.

"I am concerned about reports of his treatment while in custody that describe alarming abuses of his constitutional rights and his physical health," Rep. Dennis Kucinich, D-Ohio, said in a letter to Defense Secretary Robert Gates.

Kucinich, a member of the Committee on Oversight and Government Reform, said in a statement that he wants an "explanation of reports that the Army ignored evidence of mental health problems of Pfc. (Bradley) Manning, and that he is being held in conditions that could contribute (to) a violation of the his Eighth Amendment right of protection from 'cruel and unusual' punishment."

He asked for a visit, he said, because as a member of the House committee, "It is my duty to conduct effective oversight."

The allegations of abuse gained more attention on Tuesday after a friend visited Manning at the U.S. Marine Corps brig in Quantico, Virginia.

David House, one of the few people to see Manning, the prime suspect in the WikiLeaks case, since his confinement more than six months ago, said Manning "seems frazzled."

He is "sometimes simply catatonic, unable to have conversations about anything really," House told CNN.

House said Manning is physically deteriorating. "He hasn't exercised in seven or eight months since he was confined," he said.

The Pentagon disputes the idea that Manning is being mistreated. Pentagon spokesman Geoff Morrell told reporters during a news conference last week that reports "that he is being mistreated, or somehow treated differently than others, in isolation, are just not accurate."

Manning is held in his cell 23 hours a day. He is allowed out of his cell to exercise, for an hour a day.

To those, like House, who say Manning should not be held in maximum security conditions, Morrell said it's not just for his own protection.

"He's being held behind bars because he is deemed a threat, that he has been alleged to have committed a very serious crime that potentially undermines our nation's security, and therefore he needs to be confined during the course of a trial," Morrell said.