NASA says its pockets not deep enough for new rocket 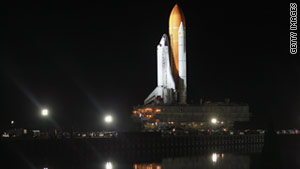 (CNN) -- The marching orders from Congress and the White House to NASA were pretty straightforward.

Go out and build a new big rocket to replace the retiring space shuttle fleet.

Unlike the shuttle, the new rocket has to be powerful enough to get out of low Earth orbit and carry humans to an asteroid and eventually Mars, perhaps even the moon. There must also be a test flight by 2016.

But at this point, NASA officials are warning of a potentially devastating setback to future space exploration.

Its first new rocket in 40 years may not happen because the agency doesn't think the $8 billion budgeted over the next three years is enough.

"We have done calculations with current models and approaches to doing this type of development and it doesn't work with funding constraints combined with schedules that were laid out in the Authorization Act," Doug Cooke, NASA's associate administrator for exploration systems, told CNN.

Congress has already responded that unless NASA can prove there's not enough money, the rocket must -- by law -- be built.

Sen. Bill Nelson, D-Florida, a key space agency supporter, was adamant when he spoke to CNN: "NASA must stop making excuses and follow this law. I believe the best and brightest at the space agency can build upon the $9 billion we've already invested in advanced technology to design a new heavy-lift rocket, while taking a stepping-stone, pay-as-you-go approach."

"We're doing everything we can to get there," Cooke said.

The $9 billion was for the now-defunct Constellation program, planned to take astronauts to the moon and on to Mars. It was cut from the federal budget last year after being called behind schedule and over budget.

After the last shuttle flight later this year, NASA will be out of the space taxi business. Commercial companies are expected to take over ferrying astronauts to and from the International Space Station.

NASA, no longer burdened with an aging vehicle and costly flights, has again been told to focus on building a new rocket.

Citizens Against Government Waste President Tom Schatz is not confident: "NASA is unfortunately becoming a black hole for the taxpayers and something needs to be done to turn things around," he said. "The Constellation program has taught us the things that work, the things that we could have done better."

The vehicle most likely to be presented to Congress would have solid rocket boosters like the shuttle, only larger; would use shuttle main engines and would also, like the shuttle, have a liquid fuel stage, Cooke told CNN. Early test flights would use a lot of existing hardware.

"We have engines that will be freed up when shuttle retires. We do have solid rocket casings that are from the shuttle program that we can use," he said.

NASA says it will tell Congress by the spring or early summer whether the rocket can be built with the money available and meet the 2016 deadline.