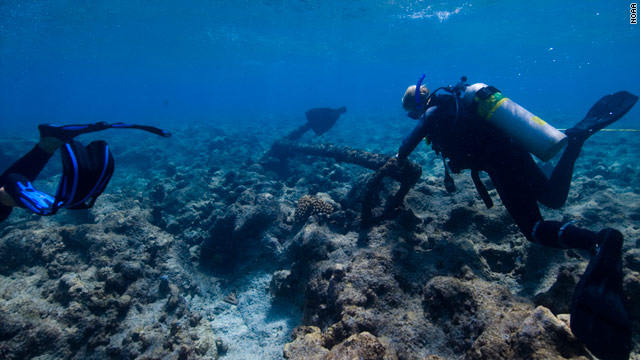 (CNN) -- In an instance of truth being stranger than fiction, American author Herman Melville turned to a horrifying ordeal as inspiration for his 19th-century classic "Moby-Dick."

In 1820, the Nantucket, Massachusetts, whaling vessel Essex was rammed and sunk in the South Pacific by a sperm whale.

George Pollard Jr. and his surviving crew, initially using three small boats that were aboard the Essex, resorted to cannibalism while they drifted in the open ocean for more than two months before being picked up by other vessels.

The sea truly must have been Pollard's mistress, for he took command of another whaler. The captain and Two Brothers were off Hawaii on February 11, 1823, when the ship hit a shallow reef. The terrified crew, clinging to small boats, was rescued the next day by a fellow whaler.

"This rare archaeological discovery is the first discovery of a wrecked whaling ship from Nantucket, Mass., the birthplace of America's whaling industry," the agency said.

Whaling ships, part of America's expansion into the Pacific Ocean, explored portions of the Indian Ocean and the polar regions.

The shipwreck lies off French Frigate Shoals in the blue waters of Papahanaumokuakea Marine National Monument in Hawaii.

Melville completed "Moby-Dick" in 1851, drawing on an Essex crew member's account of the remarkable event.

The twice-cursed Pollard retired from whaling, became a watchman and lived to be almost 80. Melville met him in Nantucket shortly after completing "Moby-Dick."

Author Nathaniel Philbrick wrote about Two Brothers and the Essex in "In the Heart of the Sea."

While the Essex story is linked to "Moby-Dick," Pollard must not have been the inspiration for its mercurial Captain Ahab.

"To the islanders he was a nobody," Melville said of Pollard, according to the Nantucket Historical Association. "To me, the most impressive man, tho' wholly unassuming, even humble -- that I ever encountered."