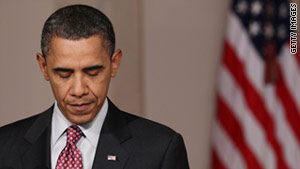 President Obama said Washington can "lend moral support to those who are seeking a better life for themselves."
STORY HIGHLIGHTS
RELATED TOPICS

Speaking at a White House news conference, Obama said Iran's clerical leadership is "pretending to celebrate what happened in Egypt" while "gunning down and beating people who were trying to express themselves peacefully."

Mindful of the Islamic republic's accusations that the United States and other powers were behind Monday's opposition protests in Tehran and other cities, Obama said Washington can "lend moral support to those who are seeking a better life for themselves."

"My hope is we're going to continue to see the people of Iran have the courage to be able to express their yearning for greater freedom and a more representative government, understanding that America cannot ultimately dictate what happens inside Iran anymore than it could inside of Egypt," he said.

A wave of protests have targeted Middle Eastern states since mid-January, when weeks of anti-government demonstrations forced Tunisian autocrat Zine El Abidine Ben Ali to flee to Saudi Arabia. On Friday, Egyptian President Hosni Mubarak stepped down after ruling his nation for nearly 30 years, and other opposition movements have taken to the streets in Algeria, Jordan, Yemen, Bahrain and Sudan.

Obama said his administration has told Middle Eastern leaders that "the world is changing," and "You can't be behind the curve."

"I think that the thing that will actually achieve stability in that region is if young people, if ordinary folks, end up feeling that there are pathways for them to feed their families, get a decent job, get an education, aspire to a better life," he said. "And the more steps these governments are taking to provide these avenues for mobility and opportunity, the more stable these countries are. You can't maintain power through coercion."