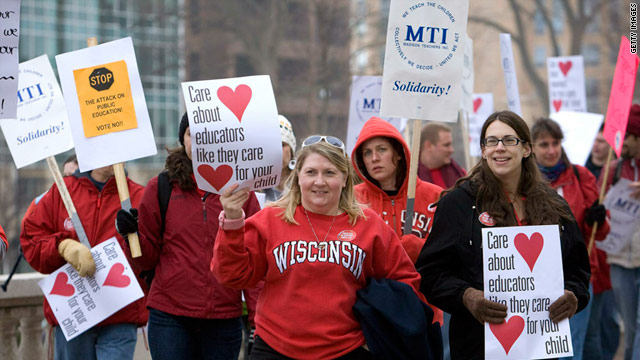 (CNN) -- This week's growing controversy about funding public education in Wisconsin is hardly an isolated incident, as 40 states are coping with budget shortfalls totaling $140 billion, which will threaten America's 14,000 school districts for the next five years, one analyst said Thursday.

The summit was sponsored by the U.S. Department of Education.

"What is becoming very clear is that state legislatures and governors are struggling with huge budget shortfalls," said Anne Bryant, executive director of the National School Boards Association, who attended the gathering.

Whereas states found ways in the past to patch over budget problems, now it's a "dire" situation, Bryant said. That played out in the extraordinary rallies by Wisconsin teachers unions and their supporters this week condemning proposed cuts in pension and health care benefits.

"Budget issues were front and center" at this week's unusual gathering of public education's labor and management leaders in Denver, Bryant said. "As we all see tremendous budget shortfalls in states, it's going to take all of us working together, instead of pitting one set of adults against another set of adults," she added.

What concerns educators is that the quality of education -- and student achievement -- will take staggering hits under budget cuts now being considered in many states, Bryant said.

So far, shortened school years and teacher layoffs have been limited to places such as Hawaii and Los Angeles, said Frederick M. Hess, director of education policy studies at the right-leaning think-tank American Enterprise Institute. Almost half of K-12 school funding typically comes from state budgets, he said.

Most budget-tightening in districts across the nation have focused on putting off textbook purchases, turning down thermostats, tightening up school bus routes, and eliminating electives and after-school activities, Hess said.

"What we are looking at going forward is much more in the way of layoffs and furloughs, but that would be the results of unions choosing not to collaborate with districts to address unaffordable pensions, health care or salary costs," Hess said.

Such a conflict is playing out in Wisconsin, where for the second day Wednesday, at least 10,000 demonstrators and teacher union supporters protested a proposal by Gov. Scott Walker to remedy a $137 million shortfall this year.

In a budgetary situation being played out in other cash-strapped states and municipalities, the legislation requires workers to cover more of their health care premiums and pension contributions, although supporters say local governments will ultimately decide on health care contributions for their employees.

"Calling this a budget bill is a smokescreen," said Bryan Kennedy, president of American Federation of Teachers-Wisconsin, which represents about 17,000 employees. "This is an attack on all labor organizations."

The National Conference of State Legislatures has compiled a list of the "serious budget challenges" awaiting state lawmakers this year, largely because states will see $37.9 billion less in federal stimulus, or American Recovery and Reinvestment Act, funds later this year.

"This will create big holes in the state budgets -- what many officials are calling the 'ARRA cliff,'" according to a recent report by the national conference.

Though the recession ended in June 2009, state finances will be slow to recover, according to the conference report.

Some of this year's biggest budget gaps are $13 billion in Illinois, $6 billion in California, $4 billion in Texas and $1.1 billion in Washington, the conference report said.

The American Federation of Teachers has proposed options for states to address the shortfalls, especially after at least 25 states cut funding for K-12 education in 2009 and 34 states cut higher education spending.

But Hess said the education funding crisis is going to get worse before it gets better, partly because a third of K-to-12 funding comes from property taxes, whose changes tend to lag behind tax assessments by about three years.

That means school districts have yet to fully feel the 2007-2008 housing bubble collapse, Hess said. He said the 40 states' collective budget shortfalls of $140 billion will make America's 14,000 school districts vulnerable for the next five years.

"The cuts have been far less draconian than advertised. States are looking at massive shortfalls, like in California, but to date, the most we've done is to kick the can down the road," Hess said.

"I think not only has the worst of it not yet hit, but I think K-12 schooling is looking at a four or five bleak years ahead, and thus far the superintendents and school boards have not done much to prepare the districts for the challenge," Hess said.