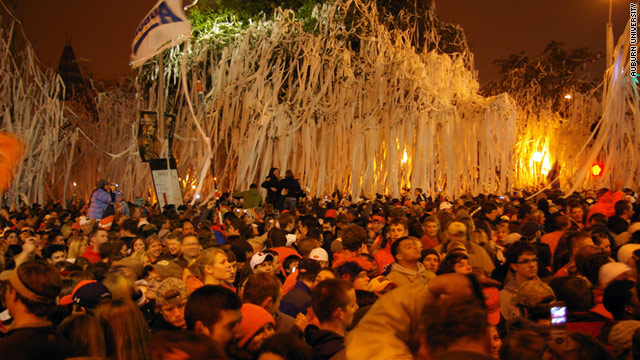 Auburn, Alabama (CNN) -- Hundreds of Auburn University fans rallied Saturday under their beloved oak trees, hoping against hope that the trees poisoned -- allegedly by a disgruntled University of Alabama fan -- might yet be saved.

"They're Auburn. They're the heart of the town. They're 130 years old. And you can't squish what these trees are," said Kristen Easterling, a junior at Auburn University.

The trees' plight -- university scientists say its doubtful they can survive the poisoning with a harsh herbicide -- has even helped bind the deep-seated rivalry between Auburn fans and its cross-state arch rival, the University of Alabama.

More than 50,000 people have joined a Facebook page called Tide for Toomers, whose organizers said on the page that supporters have raised nearly $32,000 to help support efforts to save or replace the trees.

"I've never felt more strongly bound to people in my state than now," said Erin St. John, who organized Saturday's rally. "We've always said we have a huge rivalry, it's one if the biggest rivalries in the south if not the nation. And yet Bama fans are telling us constantly they really regret what happened, that they are on our side, and that they're praying for the Toomer's trees."

For generations, Auburn fans have thronged to the trees, which are named for a historic drugstore nearby, to celebrate and "roll" the trees with toilet paper. The latest significant celebration was after the Auburn Tigers defeated Oregon for the national football championship on January 10.

On Thursday, Auburn police arrested Harvey Updyke Jr., 62, on a charge of criminal mischief for dousing the soil around the trees with a herbicide commonly used to kill trees and brush.

Officials learned of the alleged poisoning after a man called a Birmingham, Alabama, talk show and said he had poisoned the trees the weekend after the annual Auburn-Alabama football game in November. Auburn won, 28-27.

The caller claimed Auburn students celebrated under the trees when they heard news of the death of renowned Alabama football coach Paul "Bear" Bryant, and also mentioned the placement of a jersey with Auburn quarterback Cam Newton's number on the statue depicting Bryant in 2010.

Laurie Fuller, an Auburn graduate who returned to the region to raise her children, said she first felt pity for the alleged poisoner, then anger.

But she said ultimately, no matter what happens to the trees, she's been gratified by how supportive Alabama fans have been.