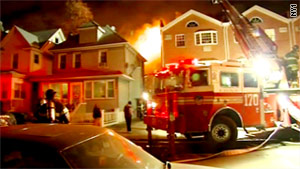 One woman was killed and 20 firefights were injured in the five-alarm blaze.
STORY HIGHLIGHTS

The fire left an elderly woman dead and injured 20 firefighters and three Brooklyn residents, according to a New York Fire Department statement.

A voodoo priest allegedly placed the candles on the floor around the bed on Saturday after a woman paid him $300 to perform a ceremony with a sexual component, that was meant to bring her good luck, fire department officials said.

The candles were accidentally knocked over during the ceremony prompting the man to douse the flames with water and open a window in an effort to clear smoke from the room, the statement said.

Forty mile-per-hour wind gusts instead shot the flames back inside the room, it said, creating a "blowtorch effect" that whipped through the open window and pushed the fire into the building's fourth floor hallway.

"Time and time again we respond to tragedies that could have been so easily prevented," Fire Commissioner Salvatore J. Cassano said in the statement. "This fire had so many of those elements ... hopefully others will learn from this tragedy."

The occupants fled the apartment, leaving the door open, the statement said.

Nearly 200 firefighters from 44 companies took seven hours to bring the fire under control.

Authorities are currently investigating the incident.