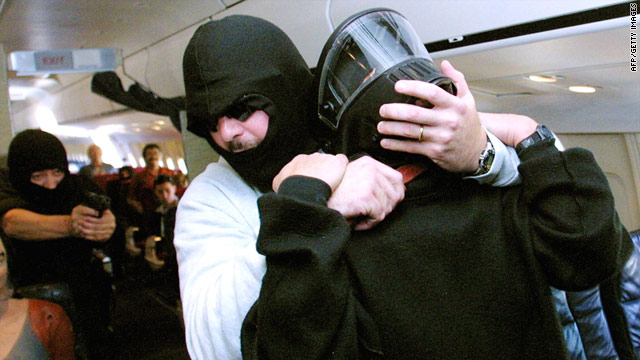 Federal air marshals train through a simulated hijacking. Online surveys have been sent to marshals asking them about favoritism and mission assignments, among other things.
STORY HIGHLIGHTS

Washington (CNN) -- Thousands of federal air marshals are being surveyed to see whether some employees' allegations of discrimination, retaliation and misconduct are isolated or widespread.

In an online survey -- a copy of which was obtained by CNN -- the Department of Homeland Security's Office of Inspector General asks air marshals whether favoritism has played a role in promotions, job evaluations and mission assignments. It also asks whether air marshals have been discriminated against or harassed on the job, and whether they feel they can report misconduct without fear of retaliation.

The survey covers a broad range of areas that have been the subject of OIG investigations in recent years. The OIG is "conducting a review of allegations of discrimination, retaliation and misconduct within the Federal Air Marshal Service," Assistant Inspector General Carlton Mann wrote in a letter accompanying the survey.

Mann wrote the OIG will "maintain strict confidentiality" of individual survey responses and will not share data "that could allow respondents to be identified."

Air marshals were notified of the password-protected survey on Monday and are asked to complete it by March 28. Only current air marshals are being surveyed.

Numerous current and former air marshals, speaking on the condition of anonymity, have told CNN the agency was rife with mismanagement in the past and that newer agency leaders have dealt with some of the complaints through a series of quiet job transfers, demotions and retirements.

"Our reaction (to distribution of the survey) is entirely positive," said Jon Adler, national president of the Federal Law Enforcement Officers Association, which represents "a significant percentage" of the air marshal work force. "The topics covered in the survey are challenging topics, they're sensitive topics, but you can't resolve them by ignoring them."

Adler said agency director Robert Bray, who took over in June 2008, "has done a commendable job attempting to rehabilitate a broken agency. But at the same time, having this independent, objective survey is a necessary credibility and integrity check."

However, one current federal air marshal contacted by CNN said he does not believe the survey will improve conditions within the agency.

The air marshal, who has never filed a complaint about the agency and said he does not have "an ax to grind," said he witnessed discrimination, favoritism and retaliation against others.

Asked why he did not want to speak on the record, he said, "Fear of retaliation."

In addition to the survey, several air marshals tell CNN they have been interviewed by OIG investigators in recent months about specific complaints.