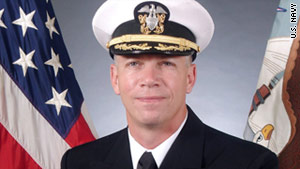 Norfolk, Virginia (CNN) -- The Navy announced major steps Thursday against some of its most senior officers for their failure to halt a series of raunchy videos shown aboard the USS Enterprise between 2005 and 2007.

Capt. Owen Honors already has lost command of the aircraft carrier over the videos and now must show why he should remain in the Navy.

The most serious actions were a recommendation that the Navy secretary place "letters of censure" in the files of Honors as well as senior Navy officers including Rear Adms. Lawrence Rice and Ron Horton, who were commanders of the Enterprise when Honors, then the ship's second-in-command, was making and showing the videos.

Such censure could have a devastating impact on careers, and might result in loss of rank and reduction of retirement income.

Adm. John Harvey, the head of Fleet Forces Command, said in Norfolk Thursday afternoon that the investigation is now complete.

"This is a very big deal," Harvey said of the actions the Navy already has begun.

Harvey said he met face-to-face with the top officers in recent days to discuss the actions he is seeking against them. "I was dealt this hand and it was my duty to play it," Harvey said about the investigation he headed.

In addition to the top brass, the admiral said he was sending nonpunitive "letters of caution" to 32 officers and sailors who helped produce and broadcast the videos. Those letters will not become part of permanent files for those individuals.

He said nonpunitive letters of caution should be placed in the files of Rear Adm. Raymon Spicer, now retired and Vice Adm. Daniel Holloway, who had been commanders of the Enterprise Strike Group.

In January, Harvey removed Honors as commanding officer of the Enterprise, claiming the captain demonstrated poor judgment with videos he created on the carrier between 2005 and 2007.

Harvey had promised to investigate what Honors' senior officers knew about the videos and what actions they took.

Harvey said the Enterprise, despite losing Honors as its commanding officer just before it left for its present assignment in the Middle East has "performed magnificently."

"There is no ship I'd rather have in the middle of the mix than the USS Enterprise," Havey said.

Harvey said that he blames the episodes of the videos on what he called "leadership leading down the wrong path." But he said he did not consider what happened there to be a wider concern. "I do not detect a Navy-wide problem," he said in a lengthy off-camera session after his televised statement.

He said that he was issued a nonpunitive letter of caution early in his career and hoped such "tough-love" tactics could help junior officers and sailors learn and improve.

He said investigators had found 55 videos stored on the carrier's computer system and 25 were determined to be vulgar and objectionable and in violation of proper behavior.