Officials: Lack of oxygen likely cause of fish kill in California 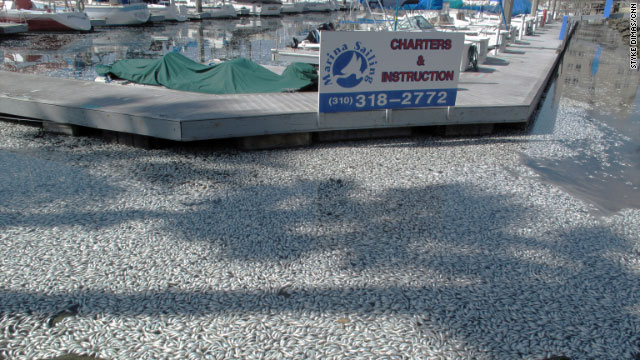 A California Department of Fish and Game spokesman says oxygen deprivation was the cause of death.
STORY HIGHLIGHTS

Los Angeles (CNN) -- A southern California fish kill that authorities identified as "millions" of sardines is not the result of any environmental foul play but rather is the product of natural forces, officials said Tuesday.

Floating fish were so pervasive in King Harbor Marina in Redondo Beach, California, that some moored boats seemed surrounded not by water but by the lifeless aquatic animals a foot deep.

"All evidence points to oxygen deprivation as cause of death," California Department of Fish and Game spokesman Andrew Hughan told CNN.

"There is no oil sheen, nor is there a chemical sheen," Hughan said.

Redondo Beach Police Sgt. Phil Keenan said authorities are confident of test results showing that oxygen deprivation caused the massive fish kill because the other part of the sardine school is alive and well in the mouth of the harbor.

Keenan said the floating fish are a foot deep, and clean-up boats will spend the next few days removing the silvery animals by net.

"Part of the sardine school is out in the channel of the harbor and they're doing fine," Keenan told CNN. "For some reason, this large school of sardines got chased into the harbor -- and they died off."

Authorities said that the sardines likely sought calm waters inside the 1,400-vessel marina Monday evening when winds were gusting up to 45 mph and the waters were rough.

"They like to follow each other and it only takes one to come in before the others follow," Brent Scheiwe, program director of the SEA Lab, a hands-on coastal science education center in Redondo Beach, told reporters at a press conference Tuesday.

"The fish found these back areas of the harbor, and then the oxygen depletion would have occurred... If it's rough out there, they will stay here in the waters where it's more sheltered," Scheiwe said.

"There is a risk of the same thing happening tonight," he added.

The harbor's algae may have contributed to the lack of oxygen, and then when the fish started dying, the resulting bacteria also consumed oxygen, Scheiwe said.

Once the fish got into the harbor, "they couldn't get out," said Redondo Beach Fire Chief Dan Madrigal.

About the extraordinary number of dead fish, Hughan stated that "while it is unusual, it is not unprecedented. This is natural selection."

Hughan said a necropsy, including a chemical analysis, will be performed on some of the dead fish.

In what officials described as $100,000 clean-up effort, crews had been moving the dead fish into the open ocean to let them decompose naturally, but they decided on a more efficient method of removing the fish from the marina and having them sent to be recycled for fertilizer, Madrigal told reporters.

A statement by the city of Redondo Beach listed the number of dead fish as "millions."