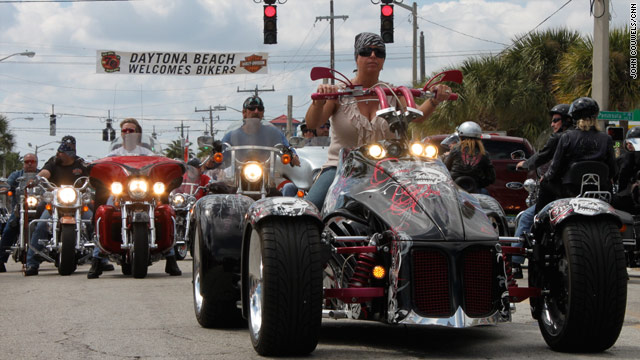 The Bike Week celebration in Daytona Beach, Florida, lasts 10 days. The crowd it attracts has changed through the years.
STORY HIGHLIGHTS
RELATED TOPICS

Leather-clad riders on Harley-Davidsons could be seen throughout the Florida resort town riding alongside large, stately motorcycles carrying a CEO and lawyers in khaki and blue Oxford button-downs.

On the one hand, this is not your father's Bike Week -- the one with the reputation of topless girls and bike gangs fighting in the street.

On the other hand, this is your father's Bike Week -- they're still coming with their aging baby boomer friends, though they've mellowed over the years.

"Most of the folks have a good income," said Kevin Kilian, vice president of the Daytona Chamber of Commerce.

Daytona's bike celebration began in 1937, centered on a motorcycle race between the beach and the street. In the beginning, the race and festival were separate weekend family events, Kilian said. The two events came together, expanding into a 10-day celebration throughout the Daytona area. World War II interrupted the event for several years.

Over the years, Daytona's Bike Week became seen as a hangout for dangerous motorcycle gangs involved in illegal activities.

"As the progression goes, it was -- I don't want to say rougher -- (rather) a different crowd back in those days," said the chamber vice president. "The stereotype that some attribute to Bike Week doesn't exist anymore."

In the 1980s, Daytona city leaders told the Chamber of Commerce to clean up Bike Week or get rid of it. Over the years, the chamber worked with sponsors, city officials and police to clean up the image by eliminating the rough crowds.

They still exist, but not to the extent as it did in the late '80s, yearly attendees say. Some bars in Daytona, however, still have signs on their front doors telling bikers to not wear their bike club "colors" or logos on their jackets in order to keep peace among opposing bike clubs or gangs.

But the only gang that has over run the town this year has larger waistlines, graying hair and a whole lot more money to spend. Venders sell everything from tourist trinkets, leather gear and motorcycles accessories. The motorcycles themselves that can run as high as $35,000.

It's more and more commercial just like everything else now a days.
--Jerry Howell, biker

"It's more and more commercial just like everything else nowadays," said retiree Jerry Howell, describing himself as 60-ish -- while sitting on his motorcycle with his new 60ish- year-old girlfriend.

Howell, who recently moved to Florida from Baltimore, says he sees himself as a "biker" because he has been riding motorcycles for 50 years, unlike those attending Bike Week today.

"Most people don't have the experience. They go out and buy a new bike, take a course, buy the leathers and the getup and they're instant bikers -- but it doesn't work that way," said Howell, who has attended Bike Week for many years.

"Nowadays, you got the lawyers and doctors or everybody is a biker. It used to be -- 'bikers' who were here," he said, wearing a jeans vest full of biker pins, a biker's head wrap and a face shaven precisely to produce a white mustache and goatee.

The really big show occurs along Main Street in Daytona Beach, where people and bikes parade all day and night.

Folks from all walks of life can be found along the street shopping, people-watching or grabbing a beer from one of the self-described "beer girls" while listening to a live band cranking out a rock classic from the '80s.

Aging bikers covered with tattoos, before tattoos were part of pop culture, seem to have mellowed -- like one biker who walked down the street proudly carrying his teacup Chihuahua.

Most people come with a husband, wife, partner, parent, child or fellow biker. 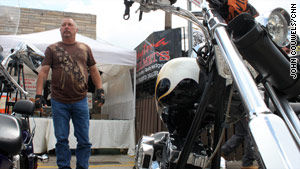 Paul Hatton and his 21-year-old son pulled two bikes on a trailer from Houston to Daytona.

Paul Hatton and his 21-year-old son pulled two bikes on a trailer from Houston to Daytona. "This is his first, my son wanted to come down, so I said -- let's go," said Hatton.

"You can have a good time, looking at all the bikes and the women," he said with a laugh.

A couple who both recently retired as laboratory workers at the Veterans Administration in Tampa were surprised by the crowds during their fifth visit to Bike Week.

"I'm amazed by the different types of people you see here, the young kids on their crotch rockets and you see the typical or what you think as the typical biker types that are tough and mean who drink hard and ride hard," said Barbara Presnel, 55.

But Presnel said she realized once back at the hotel people are just the same as her family.

Scott Calico, 30, who lives near Daytona agrees there's no reason to fear bikers.

"If you get the chance to get and know the people, a lot of them are just regular people like you and me or doctors and lawyers but everyone is all around good people," said Calico, who brought his 6-year-old daughter with him because she loves to see all the bikes.

"Yeah, you do have the bad ones, but there's more good than bad," said Calico.

On the final weekend, the younger crowd comes into town for the big event, Daytona 200. The AMA Pro Racing season open takes place at the Daytona International Speedway.

When the sun goes down, bars become packed with happy, tipsy people. Some bars offer crazy events such as women's coleslaw wrestling.

"Coleslaw wrestling, I've never seen that," said Howell said. "It's my first time, I'm going to take it all in," his girlfriend added.

Calico has attended Bike Week for eight years and has learned a person's motorcycle tells a lot about the rider.

"If you look at the bikes and the rider, you can tell that the bike matches the rider. You can learn about someone by how they ride their bike," he said.