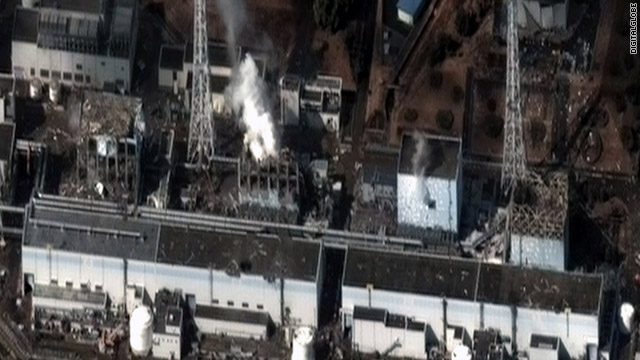 Because of the danger of radiation, the U.S. military will not allow troops within 50 miles of Japan?s damaged nuclear plant.
STORY HIGHLIGHTS

Washington (CNN) -- Concerned about potential radiation exposure, the U.S. military will not allow troops to get within 50 miles of the damaged Fukushima Daiichi nuclear plant, Col. David Lapan, a Pentagon spokesman, said Wednesday.

The exclusion zone matches the area from which the U.S. Embassy in Tokyo is advising American citizens to evacuate, if at all possible.

As a further protective measure, prior to leaving on missions within 70 miles of the reactors, U.S. helicopter crews departing Naval Air Facility Atsugi were first given doses of potassium iodide to help protect their thyroid glands from possible exposure to radiation, Lapan said. The thyroid is particularly vulnerable to some kinds of radiation, and the iodide reduces the risk of radiation illness.

Prior to Wednesday's missions, the only air crews that had been given potassium iodide were treated after being exposed to radiation, Lapan said, adding that when a sailor is given iodide is not an across-the-board policy.

"It was situational, based on the circumstances. They decide based on medical personnel who determine whether either afterward the tablets are something they can use as a precaution, or if they can be used in a precautionary way," Lapan told reporters at the Pentagon.

Crews returned Wednesday with no sign of exposure, according to a spokesman for the U.S. Navy.

"None of the crews that came back today, including the crews given iodide in advance, showed any levels of contamination," said Lt. Anthony Falvo, a spokesman for the U.S. 7th Fleet in Japan.

The only U.S. military assistance being provided to help Japanese authorities deal with the burning reactors is a pair of fire trucks from U.S. military bases in Japan that have been turned over to the Japanese. Japan has since asked for more pumps and hoses to go with the trucks, and Lapan said they are working to fulfill that request. No U.S. troops are part of the firefighting efforts.

The 7th Fleet now has 14 ships on station in the waters off the coast of Japan, including the USS Cowpens, which just joined the relief effort. A 15th ship, the USS Blue Ridge, is expected to arrive in a day or two.

It's unclear if the air crews who, prior to Wednesday, tested positive for radioactive contamination have been given a clean bill of health and clearance to fly missions again.

"It depends on the nature of the contamination, again, if it's surface contamination, that can be taken care of with soap and water and disposing of your clothing, those types of things," Lapan said.

"That's different than ingesting (radioactive material), which is the reason they take the tablets."

Lapan said the Japanese government has not requested that the United States send military troops to help fight the reactor fires, but if a request was made, Washington would consider an exception to the exclusion zone.