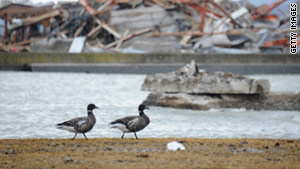 Birds walks beside debris at a port in Minamisanriku, Miyagi prefecture on March 18, 2011.
STORY HIGHLIGHTS

(CNN) -- The massive waves that churned across the Pacific after the Japan earthquake last week swept away nests protecting seabird chicks unable to fly, leaving scores dead west of Hawaii.

The death of seabirds at the Midway Atoll National Wildlife Refuge are much higher than initially thought after tsunami waves pounded the islands, officials said.

The tallest wave was nearly 5 feet and completely washed out the reef and Spit Island, the smallest in the Atoll.

In the hours after the tsunami waves struck the refuge, officials concentrated on freeing some 300 birds that were either waterlogged or trapped in debris.

After the rescues, biologists turned their attention to surveying the damage, the U.S. Fish and Wildlife Service said in a statement.

The survey shows that 22% of this year's albatross hatchlings were lost as a result of the tsunamis and two winter storms that struck the refuge earlier this year.

About 110,000 Layson and black-footed albatross chicks were killed, along with 2,000 adults, officials said.

Biologists initially thought losses were around half those numbers.

"This tsunami was indeed a disaster at many levels, including for wildlife," said Barry Stieglitz, a project leader for the Hawaiian and Pacific Islands National Wildlife Refuge Complex.

Stieglitz said that albatross numbers can rebound, but added that biologists "remain concerned about the compounding effect of this tsunami on the existing stresses of invasive species, global climate change, incidental mortality from long-line fishing and other threats to albatross and other wildlife populations."

Among the missing is a so-called "celebrity" albatross called Wisdom. Officials believe Wisdom, age 60, may be the oldest wild bird in the world.

Wisdom recently hatched, and biologists said they haven't seen any sign of her or her chick.

Biologists at the refuge also suspect that thousands of Bonin Petrels were lost, but have been unable to confirm any numbers because the birds nest underground.

The national monument and the wildlife refuge are home to 3 million seabirds from 21 different species, according to officials.

Officials will work with the National Oceanic and Atmospheric Administration to evaluate the impacts of the tsunami on the Hawaiian monk seal and the Hawaiian green turtle.

The earthquake and ensuing tsunami on March 11 killed thousands of people in Japan, police said.