Add this to Utah's list of state symbols: an official firearm 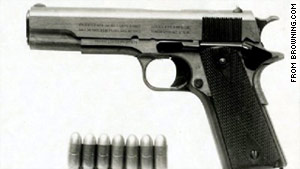 The U.S. military chose the M1911 to be its standard-issue sidearm for all branches of service in 1911. It remained so until about 15 years ago.
STORY HIGHLIGHTS
RELATED TOPICS

(CNN) -- Until this week, Utah had 24 state symbols, from tree (the blue spruce) to insect (the honeybee) to even cooking pot (the Dutch oven).

Now it's added an official state firearm -- the John M. Browning-designed M1911 pistol, becoming the first state in the nation to have one, according to the state legislator who sponsored the law.

State Rep. Carl Wimmer, a Republican who was a police officer and SWAT team commander, came up with the idea for a state firearm last year after hearing about how Pennsylvania lawmakers wanted to make the Pennsylvania long rifle its official state firearm, Wimmer told CNN on Friday.

That measure eventually failed, he said.

Wimmer selected the semi-automatic M1911 because gun maker Browning was born and raised in Ogden, Utah, and was the son of Utah pioneers who crossed the plains in the 1800s, Wimmer said.

This year is also the 100th anniversary of when the U.S. military chose the M1911 to be its standard-issue sidearm for all branches of service, Wimmer said. That's how the pistol got its name: "M" for military and 1911 for the year that the military began issuing the gun to all its servicemen and women, Wimmer said.

In a state more known for its strong Mormon traditions and breathtaking national parks, the creation of an official state firearm raised controversy, especially when the measure was pursued even after January's mass shooting in Tucson, Arizona, that killed six persons and wounded 13 others, including U.S. Rep. Gabrielle Giffords. The bill was introduced just before the horrific shootings, Wimmer said.

The governor's office played down the lethality of the new symbol and focused more on its creator.

"This bill isn't so much about a weapon as it is about honoring John Moses Browning, who was a Utah inventor and entrepreneur, and he repeatedly gave back to the state," said the governor's spokeswoman, Ally Isom.

The governor's office and both chambers of the legislature are controlled by Republicans.

The M1911 had been the standard issue in the military until about 15 years ago, when the Beretta 9mm became its common sidearm because it holds 15 rounds and the M1911 only eight, Wimmer said. However, the M1911 is still used by elite units like Delta Force, Wimmer said.

"I thought how appropriate that we honor John Moses Browning on the 100th anniversary of the U.S. military's adoption of the M1911 as their official pistol," Wimmer said.

"The list of firearms that he invented is too exhaustive for me to go into," Wimmer added about Browning. Wimmer owns a Browning-designed M1911, he said.

"Almost every military weapon that is currently in use today has one point or another been modeled after a Browning firearm," Wimmer said.

Wimmer, 35, is now considering running for Utah's fourth congressional seat, newly created after the latest census, he said. He was a SWAT commander, canine patrol officer and sex crimes detective in South Jordan, Utah, for seven years and then a patrol officer in West Valley City, Utah, for four years, he said.

He left the police force to serve in the state legislature and is now a partner in the security consulting firm Corporate Task Force in Riverton City, Utah, where he lives.