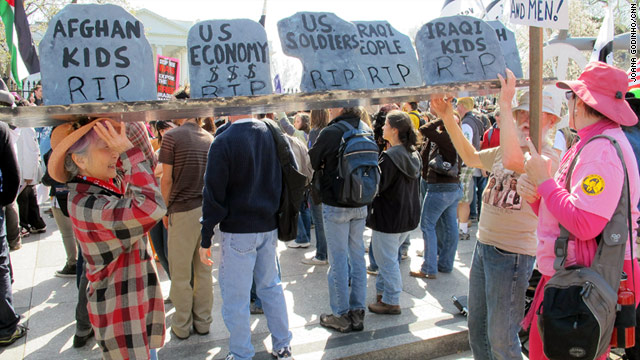 About 1000 antiwar protesters marched in Washington's Lafayette Park on Saturday, the eighth anniversary of the Iraq war.
STORY HIGHLIGHTS

Washington (CNN) -- More than 100 people were arrested in front of the White House Saturday after gathering for an antiwar protest on the eighth anniversary of the Iraq war.

About 1,000 people from various antiwar groups, including Veterans For Peace, Iraq Veterans Against War and Code Pink, marched around Lafayette Park to make three demands of the Obama administration: stop the war, expose the lies and free Bradley Manning.

Manning is a 23-year-old Army private accused of leaking classified military and State Department documents to the whistle-blower site WikiLeaks. He has been held at Quantico military prison in Virginia for nearly eight months.

Among those calling for Manning's release on Saturday was Daniel Ellsberg, a former Pentagon official whose unprecedented leak of thousands of classified documents -- dubbed the Pentagon Papers -- revealed that top American officials were actively concealing the unwinnable reality of the Vietnam War from the public.

Ellsberg, who went to trial facing 115 years in prison for his leak, was one of the 113 people arrested at Saturday's otherwise peaceful rally on charges of "disobeying an official order."

Police at the protest told CNN the arrests were made after protesters handcuffed themselves to the White House fence. The protesters were transported to a park service facility and served violation notices, the National Park Service said.

Ellsberg planned to attend another rally in support of Manning outside the Quantico Marine Corps Base in Virginia on Sunday.

CNN's Alison Harding and Ashley Fantz contributed to this report