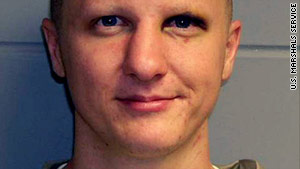 Jared Loughner is accused of shooting Arizona Rep. Gabrielle Giffords and 18 others at a grocery store in January.
STORY HIGHLIGHTS

(CNN) -- A judge has ordered Jared Lee Loughner to undergo a mental evaluation at a specialized facility in Springfield, Missouri, as soon as possible to help determine if he is competent to stand trial, according to the U.S. Attorney's Office in Tucson, Arizona.

Loughner, an Arizona man, faces 49 counts -- including murder and attempted murder -- related to the January 8 mass shooting in a grocery store parking lot.

Six people were killed in the shooting and 13 others were wounded, including Arizona Rep. Gabrielle Giffords.

Loughner's defense attorneys argued that the suspect should not be moved to Springfield because he is "'seriously ill' and that physically transferring him from Tuscon could worsen his mental state and disrupt counsel's relationship with him," according to court documents.

But U.S. District Judge Larry Burns sided with prosecutors stating in his order that he "acknowledges that moving the defendant to Springfield for a relatively short period of time will be temporarily inconvenient for the defense team. But the inconvenience is unavoidable ..."

Burns said the mental evaluation should happen no later than April 29.

A competency hearing in the case has been scheduled for May 25.

Loughner has pleaded not guilty to the charges.