Miami (CNN) -- An eagle ray weighing as much as 300 pounds landed on top of a woman on a boat in the Florida Keys last week, throwing her to the deck and pinning her underneath it -- the "scariest thing" that's ever happened to her, she said.

The woman, Jenny Hausch, was on the chartered boat Friday with her husband and three children, taking pictures of a group of eagle rays as they flew out of the water.

"These eagle rays, they were flying through the air," said Kelly Klein of Two Chicks Charters, the captain of the boat. "These giant things go out of the water and slam back down."

Hausch said she was in the front of the boat, snapping away.

"The first picture I took of the ray jumping was 50 feet in front of us," she said.

When the ray jumped again, Hausch said she was readying her camera.

"Next thing I know, it hit me square in the chest. I fell backwards and fell down," she said. 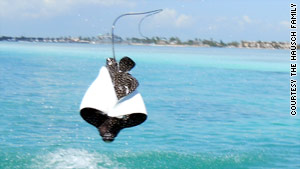 Before Jenny Hausch was hit by a ray, she had been taking pictures of eagle rays flying through the air.

Klein said the ray kept "slamming and slamming on top of (Hausch), trying to swim away."

Hausch said the incident happened so fast that she didn't have time to react.

"I was just trying to push it off me as I was scooting backwards," she said.

Florida Fish and Wildlife Officers Aja Vickers and Bret Swensson were patrolling the water near the tour boat when they heard screams.

"We turned around and looked and saw the eagle ray thrashing around in the boat and at that point we realized we had a problem," said Vickers.

As the officers made their way to the boat, Vickers said, "shoes were getting thrown off the boat, towels were going everywhere."

By the time officers made it to the boat Hausch had freed herself from under the ray.

Klein said the animal measured 8-feet across, and probably weighed a good 300 pounds.

Klein said everyone thought that Hausch was dead, but when she was freed she didn't have a scratch on her. Hausch said it was the scariest thing that's ever happened to her, and she's thankful she didn't get hurt.

Hausch's children were hysterical, but she and her husband decided to continue the charter in hopes that the incident wouldn't make them afraid of the water.

Eagle rays can measure as much as 10 feet across and 17 feet long -- from their snout to the end of their barbed tails -- and weigh up to 500 pounds, according to the Florida Museum of Natural History. The spines on the tails are venomous and can inflict serious wounds.

In 2008, a woman died from the impact when a ray jumped out of the water and hit her as she boated in the Keys, but Vickers said both incidents were freak accidents.

"This is a total one-in-a-million chance," she said. "These animals aren't attacking by any means. One theory is these animals jump during mating season."