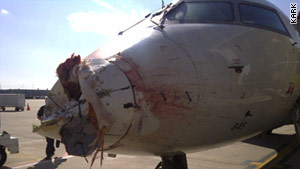 Damage to the aircraft's nose was severe after it struck a flock of cranes near Little Rock, Arkansas.
STORY HIGHLIGHTS
RELATED TOPICS

(CNN) -- A commuter plane with dozens of passengers aboard struck a flock of large birds, forcing the pilot to make an emergency landing, the Federal Aviation Administration said Friday.

Atlantic Southeast Airlines Flight 5087 was coming in for a landing at the Little Rock National Airport in Arkansas when the pilot made an emergency call at 4:38 p.m., according to FAA spokesman Lynn Lunsford.

Photographs taken of the plane after it landed revealed a gaping hole at the tip of the aircraft, along with several dents.

At least one dead crane was still attached to the plane's nose after it landed.

A total of 49 passengers and crew members were aboard the plane when the incident occurred. Officials say no one was injured.

ASA is a regional partner of Delta Air Lines.