Are you there? Share your story and images on CNN iReport. Read more about this story from CNN affiliate KOVR.

(CNN) -- Southwest Airlines announced Saturday that it is grounding 81 planes for inspection following an incident in which one of its flights was forced to make an emergency landing after a 3-foot hole tore open in the fuselage of the plane.

Investigators are trying to determine the cause of the "depressurization event" and have "decided to keep a subset of its Boeing 737 fleet out of the flying schedule to begin an aggressive inspection effort in cooperation with Boeing engineers," according to a company statement.

"The safety of our Customers and Employees is our primary concern, and we are grateful there were no serious injuries," said Mike Van de Ven, Southwest's executive vice president and chief operating officer.

The plane managed to land safely at a military base in Yuma, Arizona on Friday, where authorities "discovered a hole in the top of the aircraft," the company said earlier.

Meanwhile, passengers who were aboard the crippled the Boeing 737 said they had feared for their lives. 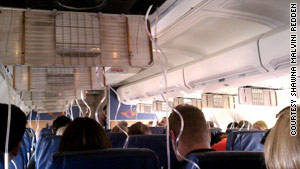 Oxygen masks dropped from the ceiling about a minute after the hole blew open, passenger Greg Hansen told CNN.

"(Then) a big explosion happened. A big noise, and from there, you felt some of the air being sucked out. It happened right behind me, in the row behind me and it covers about two-and-a-half rows," he said from seat 11C.

Hansen, 41, a regional sales manager for a biotech company, was flying home to Sacramento, California, from a business trip. Some people panicked and screamed as the blue sky and sun began to shine through the cabin in mid-flight, he said.

The Federal Aviation Administration (FAA) said the captain made a rapid, controlled descent from 36,000 feet to about 11,000 feet after the cabin lost pressure.

Hansen said the incident took place about 35 minutes into the flight. He says that it took about 45 seconds or a minute before the oxygen masks came down after the hole blew open.

Hansen said that most of the passengers were complaining of a pain in their eardrums from a rapid descent.

Southwest Airlines said only one injury was reported.

"There are no reported customer injuries," according to a statement released by the airline. "One of the flight attendants, however, received a minor injury upon descent."

Hansen said passengers deplaned and boarded another Southwest Airlines plane for Sacramento. He said the airline offered passengers accommodations in Yuma, but did not know if any passengers chose to stay.

In a written statement, Boeing spokeswoman Julie O'Donnell declined to comment on possible causes of the incident.

"Boeing is dedicated to the safety of its airplanes and the people who fly on them," O'Donnell said. "We are providing technical assistance to the U.S. National Transportation Safety Board as it investigates the incident. In accordance with international convention, we cannot speculate on either the cause or whether this incident is similar to or different from anything in the past; any questions about the investigation must be directed to the NTSB."

The NTSB said an investigative team was scheduled to arriveSaturday in Yuma.