State leaders here have passed some of the country's strictest immigration laws, including some that go beyond the controversial measures approved in Arizona last year. Latino activists said Oklahoma's laws drove tens of thousands of Hispanic immigrants away, although an exact number is difficult to calculate.

But that makes the newest U.S. Census figures even more remarkable: Oklahoma's Hispanic population has nearly doubled in the last 10 years, from 179,000 to more than 332,000.

Latinos now account for 9% of Oklahoma's 3.8 million residents, and are the largest minority group, surpassing the number of Native Americans, who make up about 8.5% of the population. While Oklahoma's population grew about 9% since 2000, the Hispanic population grew 85% and accounted for about half the state's overall growth. 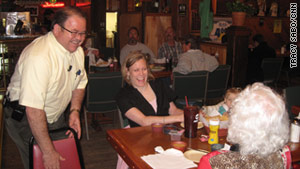 Garcia was 14 years old when he walked across rugged Southern California mountains in 1979 and quickly made it to Oklahoma to meet a brother who was already working here. He found a job washing dishes in a small Mexican restaurant. Four years later, Garcia became a U.S. citizen. He went from washing dishes to working as a busboy, then a waiter and then managed the little restaurant.

Today, Garcia is the head of a small empire of businesses feeding Oklahoma City's appetite for Tex-Mex. Garcia owns 12 restaurants, two meat markets, a tortilla factory and a banquet hall. He employs hundreds of people and he's brought most of his 13 brothers and sisters from Mexico to work in the family business.

"My dream was to have a little restaurant to work myself and my family," Garcia said during a recent lunch rush at Chelino's restaurant in the popular downtown district, Bricktown. "But I think I passed my dreams 100 times more than I ever dreamed."

When Garcia first arrived in Oklahoma, he struggled to find other Latinos. He found a Catholic church that had one Spanish-language Mass. Garcia said his rise to success was often met with suspicious eyes. Some around town, he said, thought he was a mafioso trafficking drugs into the state.

"It used to bother me, but it doesn't anymore," Garcia said.

In Garcia's 32 years living in Oklahoma, the last few have been the most difficult, he said. He calls the anti-immigration laws racist.

And yet, he said this state is home.

Republican state Sen. Ralph Shortey said he's not surprised by the increasing number of Latino residents; Oklahoma can be a comfortable, prosperous place to move, legally or illegally, he said.

He has pushed tougher immigration laws he said will remove incentives for people to come to the state illegally and slow smuggling of humans and drugs through Oklahoma City. A bill in the state Legislature now would allow law enforcement authorities to seize illegal immigrants' property and vehicles.

Latino residents "are not assimilating and enriching the culture of Oklahoma. They are invading the culture," Shortey said. "Oklahoma is not the melting pot...(Latinos are) not doing their culture any favors when it's shoved into Oklahomans' faces."

David Castillo, president of the Greater Oklahoma City Hispanic Chamber of Commerce, said the state is going through "growing pains."

He remembers sitting in his elementary school class with only two other Latino students; in recent years, he was a member of the city's school board. In 2009, the Oklahoma State Department of Education reported 41% of Oklahoma City's students were Hispanic.

He often testifies at Oklahoma's Capitol, urging lawmakers not to alienate a booming segment of the population.

"The boom has just been incredible," Castillo said. "It is the fear of the unknown, but the Latino population is growing across the nation, so it's just reality."

Documentary filmmaker George Adams is chronicling the effects of these rapid demographic changes in Oklahoma. 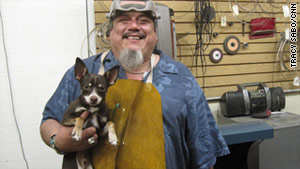 Adams lives in Oklahoma City and directed the film "Panic Nation," which is critical of state lawmakers' efforts to pass anti-immigration laws. He said Oklahoma has long enjoyed a unique relationship between Native American and Anglo cultures.

"It's definitely a melting pot, but it's always been a little backwards in its thinking," Adams said of Oklahoma. "We're a country of immigrants, but we really don't like immigrants."

Adams said he believes the latest U.S. Census figures would have shown an even more dramatic jump in the state's Hispanic population, but some immigrants weren't willing to fill out the census form. He said it's not uncommon to find families made up of citizens and noncitizens, which makes all of them live in fear.

"These people are used to living in the shadows," Adams said. "They rarely go to the stores alone. They'll go with their families."

Garcia doesn't live with that fear anymore. These days, he worries about sending his five children to college and keeping customers at his restaurant happy. He smiles when asked how a young kid from Aguascalientes, Mexico, ends up thriving in a city on the southern plains of the United States.

"The climate is bad, the city isn't very pretty," Garcia said, "but it's been a great place to raise my family."