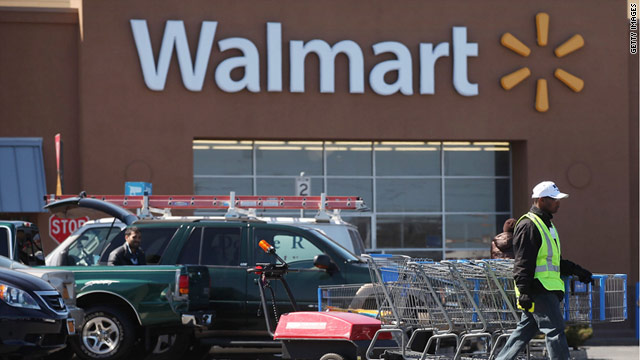 A man was glued to a toilet seat at a Wal-Mart store in Elkton, Maryland. The store pictured is in Valley Stream, New York.
STORY HIGHLIGHTS

(CNN) -- Police in Maryland are on the hunt for the perpetrator of what appears to be an April Fools' Day prank that left a man glued to a toilet at a Wal-Mart store.

If caught, the jokester who doused the seat with glue at the Elkton Wal-Mart on March 31 could face second-degree assault charges, said Lt. Matthew Donnelly of the Elkton Police Department.

Police, along with the Singerly Fire Co. and the Cecil County paramedics, were called to the scene at about 7 p.m.

There, they found the 48-year-old victim, who called for help after realizing the sticky situation he was in when he tried -- and failed -- to stand up and leave the superstore's restroom, Donnelly said.

It took responders 15 minutes to remove the victim from the stall, but they were unable to disconnect the toilet seat from his body, Donnelly said.

Instead, the victim was taken to Union Hospital of Cecil County, where the seat was detached. He left with only minor injuries to his buttocks, Donnelly said.

Police do not suspect that the victim was specifically targeted, but that the incident was a random prank, Donnelly said. They have not received reports of glue-laden toilet seats since.