Is it a new particle, or just a fluke? (CNN) -- In the search for answers to some of the most mysterious and fundamental questions about the the universe, Europe's $10 billion particle-smashing Large Hadron Collider has been hogging the spotlight in recent years.

Suddenly, this week, physics enthusiasts' eyes turned to Tevatron, a much smaller and less powerful particle accelerator in Batavia, Illinois, that is scheduled to be shut down for good after September. And, depending on what happens with the budget crisis on Capitol Hill, it could be even sooner.

At Tevatron, part of the Fermi National Accelerator Laboratory (Fermilab), scientists said they may have found evidence of a particle never observed before. That would mean a brand new building-block of matter would be added to what physicists know about the universe.

But the keyword is "may" -- there's about a 1 in 1,000 chance that it's just a fluke of statistics. In the coming weeks and months, additional data from Tevatron's detectors and the Large Hadron Collider will probably deliver a more definitive answer about whether indeed a new particle has been discovered.

"If it is true, then it's of course very important. But there's a big if," said Csaba Csaki, associate professor of physics at Cornell University, who was not involved in the experiment.

What they're looking for

Research at particle accelerators often addresses big questions that get at the very nature of existence: Why do we -- and everything around us -- have mass?

One theory that has gained a lot of attention is that there is a particle called the Higgs boson that has this power of giving particles mass. For that reason it has been deemed the "God particle" in popular culture. 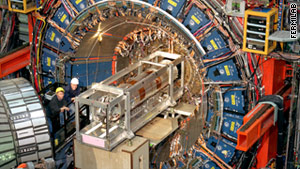 The possible discovery at Tevatron is not a Higgs-like object, said Rob Roser, a scientist at Fermilab who works with Tevatron's CDF particle detector experiment, where the new data came from.

But that doesn't rule out the potential new particle's involvement in explaining mass, experts said. Physicists Estia Eichten, Kenneth Lane, and Adam Martin said the Tevatron findings may be evidence of a "technicolor" theory involving a brand new force leading to mass. The forces we know about are gravity, electromagnetism and the strong and weak nuclear forces -- "technicolor" would add a fifth.

That is just one explanation, though. More research needs to be done to see if this strange signal at Tevatron comes from a particle with such significance, Roser said.

"It could just be a new particle. It doesn't have to be the end-all of what we know," he said.

How this possible discovery happened

How does Roser's group of some 500 scientists know what to look for? You'll need some funky technical concepts to proceed, so hold on tight:

The weirdness in the data announced this week has to do with things called W bosons and jets. W bosons carry the "weak force," involved in radioactive decay and nuclear fusion. Jets are sprays of other particles, and occur when a quark (another subatomic particle) emerges from a collision. Scientists looked at collision events that produced one W boson and two jets.

Surprisingly, there was a "bump" in the data when they looked at the energies and momenta of these two jets in many instances. It appeared that a brand new particle must have produced them, based on its expected mass.

But in order for the bump to be considered a discovery, the data must show there's about a one in a million chance that it's a fluke. Current data show about a 1 in 1,000 chance of being a statistical anomaly; many physics studies that had that level of accuracy have been subsequently knocked down.

Fermilab scientists also recently announced a possible discovery of something called "forward-backward top quark asymmetry." That doesn't sound as sexy as "new particle potentially discovered," but physicists are enthusiastic about it, too. These two observations could actually be related, Roser said.

"I'm very excited because we rarely get any hint of possible new physics," Csaki said.

The end of Tevatron, the rise of the Large Hadron Collider

All of this could turn out to be a swan song for Tevatron, which is scheduled to have its last collisions in September. There were talks last year of extending its run until 2014, but that was turned down because of lack of funds. And there's no set budget for 2011, so the current crisis in Washington could result in a speedier shutdown, Roser said.

Still, there's enough data from Tevatron to keep scientists at Fermilab busy for awhile after the accelerator has shut down. At least an additional year is needed to get the physics out of the data set, Roser said.

"This result is not some sort of play to extend our running -- we're resigned to finishing our program properly," Roser said.

Tevatron, built in the 1980s, has the ability to smash particles at energies up to 1 TeV. It was the world's highest-energy particle accelerator until the Large Hadron Collider, underground on the border between France and Switzerland, which began colliding beams in November 2009. Energies at the European machine have gotten up to 3.5 TeV, and will reach the designed goal of 7 TeV in 2014, according to the European Organization for Nuclear Research.

Although the Large Hadron Collider is much more powerful than Tevatron, the U.S. accelerator has the advantage of many more years of data collection, Csaki said. Roser's team's results came from eight years of data, recording trillions of collisions. The European accelerator will be able to collect more data a lot faster, however.

And that power offers hope for thousands of physicists whose theoretical work has yet to be validated.

"There's a generation of physicists like me who grew up without any real new discoveries in particle physics," Csaki said. "We think that the things we have been waiting for for the last two decades likely would happen in the next year or two."